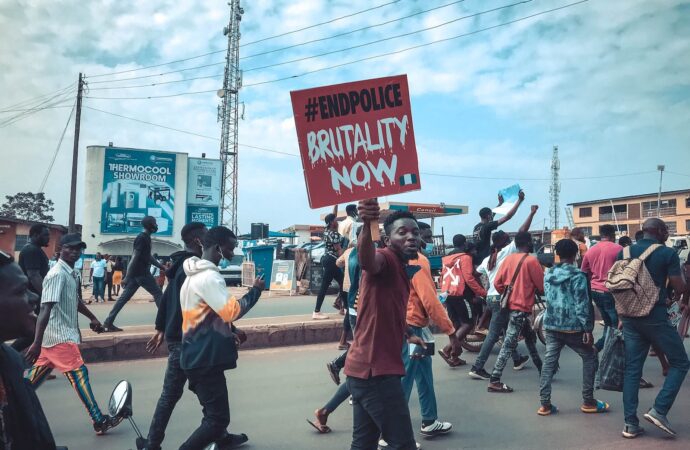 Groups overtly criticize the poor implementation of the Police Act 2020.

Two years after the country witnessed one of its biggest national protest against the brutality of the police force, there have been little or no recorded changes. There were also complaints about the outdated Nigeria Police Act, before 2020, was last updated in 2004 and even though signed before the protest, one of the things that the 2020 #ENDSARS protest ensured was the need for an implementation of the newly-signed Police Act. Thus, 2020 witnessed the 2004 Police Act repealed by the Nigeria Police Act 2020, signed by President Muhammadu Buhari.

Numerous stakeholders and security experts have however been taken back as a result of the state of the Police Act, noting that until the Nigeria Police Act 2020 is fully implemented, the state of the public safety would continually deteriorate. While security experts met in Abuja, with the aim of preferring measures that would help in the implementation of the Police Act, they were heavily critical of the state of insecurity that has climaxed overtime. According to these stakeholders, the deteriorating state of the country’s security has hugely affected the country’s economic status quo, as public safety is crucial to growing the business environment.

Public safety is always pivotal to economic growth of every community.

Laoye Jaiyeola, the Chief Executive Officer of the Nigerian Economic Summit Group (NESG), noting the role of the public safety stated that public safety is always pivotal to economic growth due to the reduction of crimes and enhancement of people’s desire to live and set up businesses in particular communities. He noted that every community needs an effective and efficient police force to thrive, maintain law and order, promote peace and harmony, as well as securing the lives and properties of the people, averring that the police is an important institution, not just for protecting lives, but also ensuring a better business environment and economic development.

Jaiyeola admitted that the 2020’s #ENDSARS protest had a huge impact on the country’s shaky economy, as well as the debilitating aftereffect of the Covid-19 pandemic. This situation is now being worsened by the current state of insecurity that has plagued the country. This issue, according to Jaiyeola was the proponent reason for the meeting, which was tagged “Open Forum on Public Safety” Towards Implementation of the Police Act 2020. The implementation of this Police Act ensures the provision for effective policing services which will be based in accountability, transparency, human rights protection and partnership with other security agencies.

It is important to consider economic & social cost of every crime response.

Nnanna Ude, a board member of the Nigerian Economic Summit Group (NESG) also asserted that while everyone is most likely to perceive public safety in terms of crime rate and the emergency response, it is also important to consider the economic and social cost associated with each crime, like medical care costs, loot earnings and property damage, all direct economic losses that the crime’s victim suffers, as well as the costs from government incurred on police protection, correctional programs and legal services.

Peter Gad, the Executive Director of CLEEN Foundation and convener of this event also pointed out that main importance of the forum was aimed at actualizing the implementation of the Act that will make provision for a much improved police force that work with immense professionalism, transparency and accountability in its operations and resource management. He further stated that moving forward, there would be a stakeholders engagement that will ensure brainstorming on plans for the implementation of the new police act.

Gad agreed that the security state of the country is continually overwhelmed by increased cases of crimes and stated that the CLEEN Foundation is working to ensure a prioritization of public safety, access to justice and security through research, legislative advocacy demonstration programs, as well as partnering with the government, private sector and civil society. Noting some of the foundation’s activities, he stated that CLEEN launched a project in 2021 which was aimed at strengthening the police reform and was supported by the MacArthur Foundation, a foundation that aims to create human right-respecting policing environment.

Acts and Law should be revised from time to time based on yhe changing circumstances. Till date we still ’99 constitution, clearly lots of things have changed. Making sure the new police act is fully implemented is a good fight by the stakeholders. Things need to get better.

Despite End sars that was held 2020 against police brutality in the nation yet our government has failed to implement the new police act to bring about good policing in Nigeria….what can we get right in this country….I wait the answer.

The police force needs restructuring. The youths revolted and protested against police brutality in 2020. Up till now, nothing has changed. They still collect bribes, they brutalize citizens and still engage in drug abuse and alcoholic addiction too. We really need to do a lot to get our country back to where it is supposed to be.

There have been few or no adjustments noted even after one of the largest national protests against police violence was witnessed.

It is imperative that the security experts who recently gathered in Abuja with the intention of recommending steps that would aid in the implementation of the Police Act go to work as quickly as possible.

The deteriorating situation of the country’s security has had a significant impact on the status quo of the country’s economy, as public safety is essential to the growth of the business environment.

The current climate of insecurity that has been plaguing the country is making the already difficult situation with police brutality in the country even more difficult.

For prosperity, the upkeep of law and order, and the promotion of peace and harmony, every society requires an effective and efficient police force; however, this is not the case for our Police in Nigeria.

To develop, uphold law and order, foster peace and harmony, and protect people’s lives and property, every city needs an effective and efficient police force.

The police officers and their institution needs a complete overhaul, most of the officers there are incompetent and greedy.

The police officers Of this country are putting aside their duties and concentrating on things that are irrelevant. They are putting self interest first before the public interest which is not meant to be like that

The police of our country are not performing the duties that why they lost their respect the citizen have for them, they do what is benefit for them first and this is not the oath them make

The Nigeria police are not trying. They need more education. Most of them don’t even understand their duties as a police officer.

In order to foster growth, peace, and harmony in our society, our government must maintain law and order by installing a fair and impartial police force under its control that only focus on protecting the citizen and the county and not exploiting people.

The brutality by the police on the citizens is to the extreme. The Nigerian Police Act 2020 was never enforced and nothing was done about it. There is too much corruption in the Nigeria system.

These incompetent policemen has caused a lot if damage for us the citizens and the government has to reform them and employ better people.

These officers are greedy and corrupt, I feel if the government increase their pay they might act normal

For us to overcome the issue of insecurity in this country, we really need to step up our game in that field and do all we can to get our country back on track.

There is no how the government will implement the white paper recommendation because the people in government also benefit from the loopholes and they will continue using the avenue to carry out their unwholesome act and most painful part is that the ordinary citizens will really pay dearly for it.