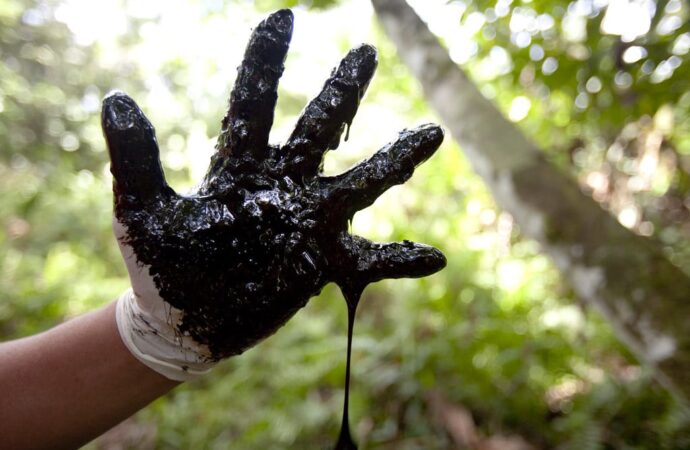 One of the world’s most polluted spots worsen as $1 billion cleanup drags on.

Reports by the United Nations (UN) have indicated that mismanagement, waste and lack of transparency are making the cleanup in the Niger Delta’s Ogoniland anything but exemplary. In the more than twenty-five years since Shell Plc left Ogoniland in Southern Nigeria, crude oil has continued to ooze from dormant wellheads and active pipelines. This spillage leaves the 386-square-mile kingdom’s wetlands covered in greasy rainbow sheen. Its once-lush mangroves are coated in crude and well-water smell of benzene as farmlands are charred and left barren.

So, when the $1 billion Ogoni Cleanup began in 2019, it brought back a ray of hope to residents of the area. Backed by Shell’s funding pledge and support from the UN, the cleanup was heralded as the most ambitious initiative of its kind anywhere in the world. But presently, UN Environmental Programme (UNEP) documents recently seen and reported by the press have shown that the project is making one of the earth’s most polluted regions even dirtier.

UNEP faults Hyprep for incompetence, waste and lack of transparency.

An Ogoni attorney with Friends of the Earth International said, “We had hoped that the Ogoniland cleanup process would set the standard for the cleanup that will have to take place in the Niger Delta as a whole. But we’ve not seen any impact. There ought to be some impact on the lives and livelihoods of people whose lands and rivers were impacted by this oil.” The UNEP gave a scathing review of the Ogoni cleanup efforts, which was led by the Hydrocarbon pollution Remediation Project (Hyprep).

UNEP paints a picture of rampant mismanagement, incompetence, waste and lack of transparency. The report points out the haphazard storage of oil-soaked soil that lets chemicals seep into uncontaminated grounds and creeks, the contracts awarded to firms with little environmental cleanup experience, and proposals for millions of dollars in unneeded work. Six UNEP documents, which were produced over the past year, were reviewed by Bloomberg. Some of the reviews had been shared with Nigeria’s environment ministry, Hyprep, and its governing bodies. The reviews included an audit of ongoing cleanup efforts, a look at Hyprep’s bidding process, and a list of recommendations for restructuring the agency.

Hyprep dismissed UNEP’s criticism as “baseless, untrue and unfair.” Hyprep’s director of technical services, Philip Shekwolo (who was a Shell official), replied in an email to questions that the government body designed its techniques specifically to avoid the “possibility of secondary pollution” and has so far provided exceptional value for money. Stefan Smith, a UNEP senior program manager, declined to comment on the documents and instead said that the UN body is “currently wrapping up its project support in line with the agreed date at the end of 2022.”

Shell said in an email response, “We recognize how important the success of the cleanup is to Shell and will continue to explore every opportunity to provide technical support to Hyprep.” London-based Shell’s wholly owned subsidiary, Shell Petroleum Development Company of Nigeria (SPDC), is on the governing council and board of trustees of Hyprep. Shell blames oil theft and sabotage for most of the interminable spills that plague the delta, but said it cleans up areas affected by leaks originating from its facilities, irrespective of the cause.

Ogoni residents say that Shell should be held to a greater account.

As Hyprep’s practices and effectiveness are questioned, Ogoni residents and their international representatives say that Shell and others who pumped oil there should be held to greater account. “The oil companies should be responsible for cleaning up the environment,” said Daniel Leader, a partner at Leigh Day, a UK firm that represents an Ogoni community and another groups of delta villages in an ongoing court case against Shell. “They have essentially deflected their legal obligations and created this parastatal that has failed to deliver.”

just imagine after 25 years and despite money put into ogoni clean up by shell and UN the place is still same,the only thing government knows is embezzlement.people are just suffering.

The government should hold the companies who polluted the area accountable for it and make a proper management structure if they are to launch another to clear up the area.

After all the money they make they can’t even clean up the land, government should do the needful. They need to clean up the Ogani land. People are suffering there.

How can this oil company not be responsible enough to take care of their source of revenue, if these areas are polluted there’s no was they would be able get enough revenue from it

Ogoni oil spill has lingered up till date due to high level of corruption in the system. The need of the community is no longer tendered to. Every Tom, Dick and Harry are only concern about their personal pocket. The present administration play nepotism and sectionalism with the whole process. It is well.

This is irresponsibility at it’s peak. If these areas are polluted, there is no way that this oil corporation can get enough money from them. How can they not be responsible enough to care for their source of income?

The government should do well to clean up the Ogoni land. We have messed up their environment through the crude oil we are generating from there. They deserve utmost respect to their environment and surroundings.

The oil companies should collaborate and look for a means ti clean this Niger delta’s ogoni, this is just one of their major source of revenue

It’s quite devastating that the sector with the has the highest revenue base is facing this kind of issue, it will cost them nothing to clean this place this , they should work on it

This Ogoni clean up is one of the authentic way by which people in government use to embezzle public fund for their selfish interest,because since years back they have been pumping money to the project without any small evidence to show that any work is been done but I really pity the indigen and the people living in the area.

The leakage of crude oil from inactive wellheads and operational pipelines has continued, and as a result, a large number of people have been impacted.

The companies should be held responsible and charged for mismanagement.

According to UN reports, the cleanup effort in Ogoniland, Niger Delta, has been anything but exceptional due to mismanagement, waste, and a lack of transparency.

Farmlands that were previously lush have been burnt and left desolate, and the once-lush mangroves are now covered in petroleum and the well water smells like benzene.

Documents from the United Nations Environment Programme that were viewed more recently and reported on by the press have demonstrated that the project is making one of the world’s most polluted places even filthy.

The lifestyles and ways of making a living of the people whose fields and rivers were contaminated by this oil should be altered in some way as a result.

Because they are the primary source of pollution in the environment, oil firms ought to bear the responsibility for restoring damaged ecosystems.

The majority of the endless spills that afflict the delta can be attributed to oil theft and sabotage, but firms have a responsibility to clean up areas that have been contaminated by leaks coming from their facilities, regardless of the reason for the breaches.

This Niger Delta area is majorly affected by oil spillage and this is something that should be tackled by the government.