Looming impoundment of the PAF by creditors 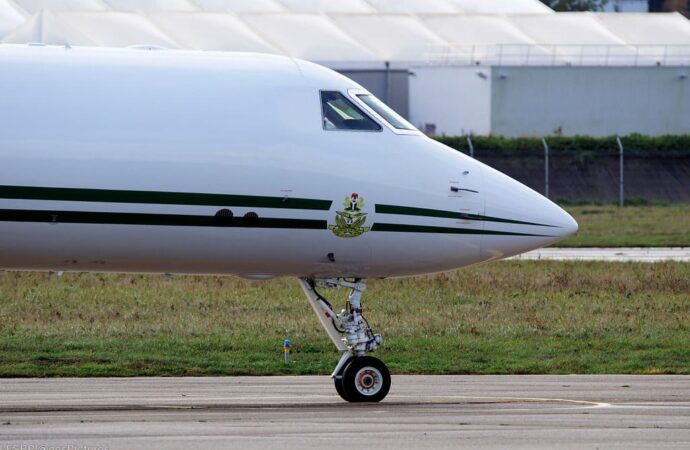 The Presidential Air Fleet (PAF) is responsible for the Presidency.

Presidential Air Fleet (PAF) was established for the primary purpose of providing a safe and comfortable airlift for the President of the Federal Republic of Nigeria, the Vice President and very important personnel under the directive of the President. The PAF has a well-structured organization of Fleet Headquarters which consists of five wings namely, Administration, Operation Services: Supply, Engineering and Operations. Each of the five wings is supervised by a Wing Chief which is similar to a Commanding Officer in an actual Nigerian Air Force (NAF) unit.

Responsible for the provision of funds for flight operations, maintenance of the aircraft and total functioning of the fleet which aids the swift activeness of the PAF are the responsibility of the Presidency. Since the establishment of the PAF in 1996, there has been a record of an annual average of 1,900 flights with an estimation of a yearly average of 2140 hours. According to the Nigerian Air Force, flights take place at the command of the Presidency, the National Assembly – Senate President and Speaker of the House of Representatives – and the Judiciary.

Budgetary proposals for the PAF rose by 190%.

The Presidential Air Fleet (PAF) also serves the purpose of enabling the pursuance of foreign policy goals through the Ministry of Foreign Affairs, especially when it involves the Economic Community of West African States (ECOWAS) and the African Union (AU). The PAF, on some occasions, is also saddled with the responsibility of transporting Heads of States of nations on friendly terms with the country as in 2003 under the regime of Olusegun Obasanjo when the former Liberian President, Charles Taylor, was flown into the country to exile in Calabar, Cross River State.

In 2020, it was discovered that in the last four years, the budgetary proposals for the Presidential Air Fleet (PAF) have risen by over 190 percent with details of the 2021 budget proposal showing that the government proposes to spend N12.5 billion on the Presidential Air Fleet (PAF). The budget proposal is further divided into two; overhead which costs N3.9 billion and capital allocation which costs N8 billion. There was also a proposal of N13.08 trillion expenditure for 2021 by the president which raised concerns about national debts and revenue challenges.

Currently, the Presidential Air Fleet (PAF) are at great risk of impoundment by some of Nigeria’s foreign creditors as a result of unpaid debts. Reports further claim that PAF has become indebted to many service providers for diverse upgrades conducted on the 10 aircraft in the fleet so as to meet the requirements of air worthiness. Ever since the induction of the President Muhammadu Buhari’s regime in May 2015, there have been adequate maintenance of the 10 aircraft that make up the Presidential Aircraft Fleet (PAF).

PAF Commander, Air Vice Marshal Abubakar Abdullahi, during his budget defense presentation at the National Assembly, made a complaint that out of the proposed N4.5 billion for the maintenance of the aircraft, an allocation of only N1.5 billion was made. These 10 aircraft include one Boeing Business Jet (Boeing 737-800 or NAF 001), two Falcons 7X, two AgustaWestland AW101 helicopters, one Gulfstream G550, two AgustaWestland AW 139 helicopters and one Gulfstream V (Gulfstream 500).

The Commander of the PAF complains of inadequate maintenance funds.

In addition, Abdullahi clarified that the cost of maintenance for each aircraft ranges between $1.5 million and $4.5 million with dependence on the level of maintenance. The commander further reveals that in 2023, as an election year, there would be a translation to more missions and increased request for spares for the aircraft as a result of increased usage. In his presentation he argued that the approval of N250 million for aviation fuel from the request of N4billion was insufficient. Succinctly, he argued inadequate funds to cater for the needs of the fleet and pleaded an upward budget review.

I don’t know any reason for a country like Nigeria will keep 10 aircraft fleet in the presidency at a time when the government is crying that there is no money in the country to provide necessary social amenities for her citizens and when this government came to power Buhari was saying that they will sell 4 of these aircraft and use the money for very important thing but later the government went on to buy extra 2.The aircraft should be impounded if they can pay.

The fund in maintaining this presidential Air fleet is so expensive. But then, if the funds are really getting into the creditors hands there won’t be need to threaten to impound to impound them. The creditors should be paid, so the PAF can be maintained

On what basis will the presidential needs 10 aircraft for. Funds used for purchasing and maintaining these aircraft can be channeled to other ways that will promote the development of this nation.

This PAF is a very good innovation because it will help the President of the Federal Republic of Nigeria, the Vice President, and other high-ranking officials require safe and comfortable air transportation.

It is the Presidency’s duty to ensure that the PAF has the necessary resources to carry out its mission, including funding for flight operations, aircraft maintenance, and the overall running of the fleet.

Imagine the presidential air fleet is owing and at the verge of been impounded,oh what a country full of several episodes of surprises.

Complaints of inadequate maintenance funds by PAF is not cool at all… The creditors should be paid, so the PAF can be maintained Approval be given ASAP!

As a direct result of Nigeria’s failure to pay its debts, the Presidential Air Fleet is currently in danger of being impounded by some of the country’s international creditors.

As a consequence of Nigeria’s inability to keep up with the payments on its debts, some of the country’s international creditors are threatening to seize the Presidential Air Fleet (PAF).

Because there are not enough finances, we will not be able to meet the requirements of the fleet, and we will need to argue for an increase in the budget.

The cost of upkeep for the presidential air fleet is substantial. However, if the money is actually making its way into the hands of the creditors, there would be no reason to threaten impoundment.

It is possible to put the money that would have been spent on purchasing and maintaining these airplanes toward the development of this country in other ways by redirecting those funds.

The Presidential Air Fleet (PAF) is responsible for the Presidency. Nawa o, this country self. Our government no get shame at all

This our President Mohammed Buhari has finished this country. Now we have zero billion reserve. The country is seriously indebted. We now faced with the situation of having PAF impounded by our foreign creditors.

The country is in big trouble. We have to vote out this political party and administration who don’t know anything on how to pilot the affairs of the nation. It shouldn’t have gotten to this level that our PAF will be impounded by foreign creditors. It is a shame to this government.

Why do they spend so much on the PAF? 2021 budget proposal showing that the government proposes to spend N12.5 billion on the Presidential Air Fleet. It went so bad that it’s now at the risk of impoundment over unpaid debts. Just wow

Some of Nigeria’s international creditors have threatened to seize the Presidential Air Fleet because of the country’s persistent inability to meet its financial obligations.

If we forego buying and maintaining these jets, we’ll have more money to invest toward the growth of our country in other ways.