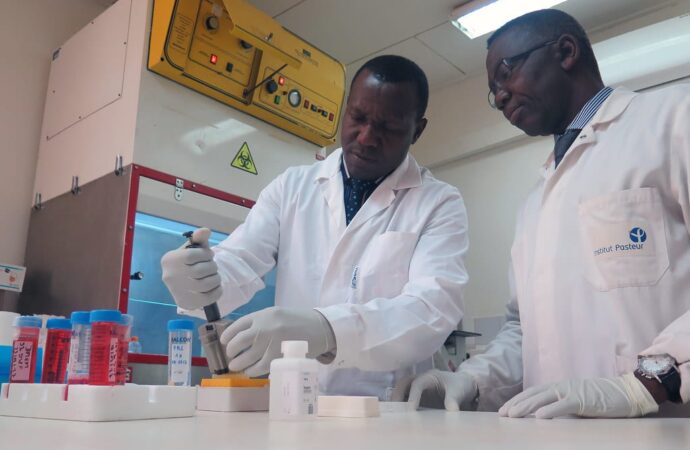 Edo state step up measures to contain the spread of Monkeypox in the state.

Two years after the global outbreak of Covid-19, Monkeypox is threatening to be another global pandemic. Prior, this virus have recorded a low level spread, mostly among animals. However, recent developments in regards to the global spread have caused the World Health Organization to declare the Monkeypox outbreak in over 50 countries, Nigeria included as a global health emergency. The growth in the cases of this virus, which is transmitted through close contact with the infected person or contaminated material has been intensely rapid, Nigeria being one of the countries with numerous cases.

Monkeypox is a zoonotic virus that is popular in Nigeria and other parts of Africa. However, the sporadic spread of the virus has seen over 16,000 global cases this year, 77 percent of the reported cases coming since July. This sporadic outbreak has caused the World Health Organization to immediately activate its highest alert level. By this, WHO now sees the virus as a significant threat to the general world health and thus, needs a coordinated global response to salvage the spread from escalating into a pandemic. Since the year began, Nigeria have reported over 357 cases of Monkeypox, states like Lagos, Adamawa, Edo, Ondo, FCT, Imo and some other states, reported to have witnessed huge spread of the Monkeypox virus.

Few weeks ago, the Edo state Ministry of Health declared that 8 persons tested positive to the virus and though these reported victims have recovered, the state’s Commissioner for Health, Professor Akoria Obehi stated that amid the increase in confirmed Monkeypox cases, it was imperative that everyone take cognizance of the health risks that the virus poses and thus, cautiously adhere to the safety precautions. Highlighting some of the symptoms associated with the virus, the Commissioner noted that people must be severely watchful of symptoms like fever, headache, sore throat, body weaknesses and gland enlargements under the jaw region and neck.

One of the victims of the Monkeypox virus in Edo state, who was admitted to the University of Benin Teaching Hospital (UBTH) days after he noticed some of the virus’ symptoms noted that his whole body was covered in rashes. Confused as to how he contracted the virus, he explained that he had not travelled, eaten bushmeat or any contact with domestic animals or bushes over the last 30 days. Admitting that prior to him contracting the virus, he had little idea about the Monkeypox virus but has now been informed about how contagious the virus is.

Dr. Ojeifo Stephenson, the Director of Public Health, Edo state Ministry of Health averred that it was immensely important to sensitize the people on the risks of contracting this virus and the health hazards, in a bid to reduce the spread. He also noted that the state’s Ministry of Health, in collaboration with the World Health Organization and other stakeholders were stepping up the surveillance, diagnostics and other necessary activities for salvaging the spread of the virus in the state.

Also, Dr. Benson Okwara, a worker at the University of Benin Teaching Hospital with over 5 years of experience in managing Monkeypox patients also noted that the World Health Organization (WHO) has been so pivotal to the state’s implementation of a swift response facilitation towards curbing the spread of the Monkeypox virus in the state. He however lamented that the spread of this virus has been as a result of the lackadaisical health-seeking behavior in most parts of the state, as well as the late patient presentation to the hospital.

Monkeypox Emergency Operation Centre activated against spread of the virus.

He however asserted that there was a basic need for a continued risk messaging to ensure that people are being sensitized about the virus, and the importance of presenting people who experience symptoms to the hospital earlier. All over the country, the National Centre for Disease Control (NCDC), also receiving support from WHO, have also created the Monkeypox Emergency Operation Centre to prepare the country against the spread of this virus, whilst contributing to the global response of the Monkeypox outbreak.

This monkeypox disease should be contained as soon as possible. It shouldn’t spread unless that will be a big blow to the country. I applaud the Edo government for the measures they are putting in place to ensure they can contain and put an end to the virus.

It’s good the Edo state government are proactive to Monkeypox from spreading across the state,it shows they are ready to protect the health of their citizenry.

The monkey virus should not be allow to spread because it will cost us a lot of lives. Edo state really make a good thing in other to contain the virus from getting spread and to eradicate the virus we should all work hand to hand to stop this virus

Due to the rise in reported instances of this virus, which is contagious through prolonged or frequent contact with an infected individual, healthy individuals should stay away from those who are ill.

It was essential that everyone understand the health concerns that the virus poses and heed the safety procedures.

People need to keep a close eye out for symptoms including fever, headache, sore throat, body aches, and gland enlargements in the neck and under the jaw.

Please they should not allow the virus to spread, regularly check up is necessary for everyone in the country

Kudos Edo state govt!
For the effort they are putting towards discovering preventive measures to ensure they can contain and put an end to the virus.

This virus needs to be treated with urgency in order to save people and avoid it from spreading. Just like that Edo state government have start off we need more energy and pressure like that to counter the virus.

Another outbreak again. When will it end for Gods sake. I pray God sees us through it because this is getting too much now

The federal government now has to direct more monkey pox treatment materials and equipments to Edo so they can contain it.

The government of Edo state need a concerted effort on a worldwide scale in order to forestall the outbreak from developing into a pandemic.

The health workers in edo state needs to step up their game as a result of issues and cases like this because this is when they are needed the most.

As a direct result of this isolated epidemic, the World Health Organization was forced to quickly activate its highest alert level, and Edo state is now required to do the same.

The government of Edo State has to acknowledge that this virus poses a severe risk to the health of the global population, and as a result, they have a responsibility to ensure that they treat it seriously.

I like the response of Edo state government in containing the spread of the virus. I wish all other state in Nigeria can replicate this.

People who live in Edo state are urged to be extremely vigilant for symptoms such as fever, headache, sore throat, and overall bodily weakness. If they see anything suspect, they should contact the local hospital as soon as possible.

I expected that when WHO declared Nigeria as one the countries with global health emergency that every state government will be proactive and swing in to action to contain and prevent the spread of Monkey pox virus. We just behind in everything.

To eradicate monkey pox, there are lot serious things that need to done, awareness,this is the first step to take,then how to manage it and to how treat it.