7 incredible places to visit in Nigeria 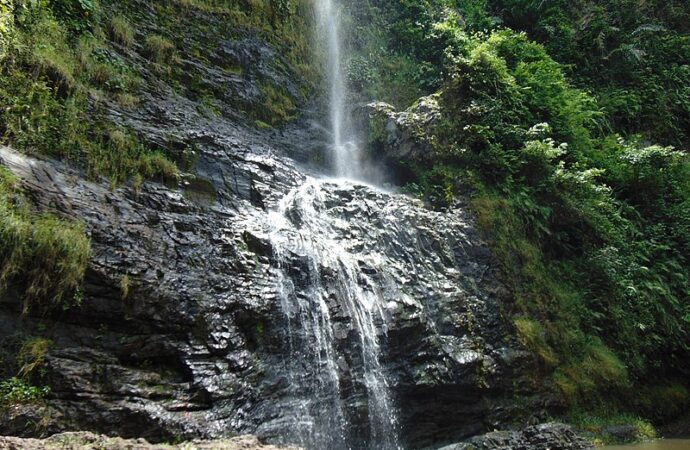 With its many beautiful places, Nigeria is a place you must visit.

Nigeria is a country located in West Africa. It is bounded by the countries of Niger to the north, Chad to the northeast, Cameroon to the east, and Benin to the west. Nigeria has a coastline along the Gulf of Guinea in the south. The country covers an area of 923,768 square kilometers and has a population of over 200 million people. Nigeria is a country with a rich history and culture. The country is home to a number of ancient civilizations, including the Nok culture, which is one of the oldest in Africa. Nigeria is also home to a number of world-famous landmarks, such as the Farin Ruwa Falls, located in Nasarawa State’s Wamba Local Government Area. This natural beauty is breathtaking.

The reserve is home to a wide variety of wildlife, including elephants.

Located in the highlands of Taraba State, Mambilla Plateau is home to the beautiful Chappal Waddi Mountain. Nigeria’s highest mountain peak is found at Gashaka-Gumti National Park, where it towers at 2419 meters. The mountain and its surrounding area is home to a wealth of rare bird and animal species, making it an important site for conservation. The park itself is also a popular tourist destination, due in part to the stunning views from the top of the mountain.

Yankari Game Reserve is a protected area in northeastern Nigeria that covers an area of 2,244 square kilometers. The reserve is home to a wide variety of wildlife, including elephants, hippopotamus, lions, and several species of antelope. The reserve was established in 1956 as a sanctuary for the endangered African elephant. In 1991, the reserve was expanded to include a broader range of wildlife. Today, it is one of the most popular tourist destinations in Nigeria. The reserve is situated in the savanna region of Nigeria, which is characterized by hot, dry conditions. The reserve receives an average of only 400 millimeters of rainfall per year. Despite the harsh conditions, the reserve is home to a wide range of species.

Another popular waterfall is the Farin Ruwa Falls.

Owu Falls are located in Kwara State, Nigeria. They are situated on the River Niger and are one of the most popular tourist attractions in the country. The Falls are approximately 30 meters high and offer a spectacular view of the river and the surrounding countryside. The falls drop 330 feet down into an ice-cold pool. There are several hotels and lodges in the area, as well as a number of restaurants and bars. The Falls are a popular spot for both local and international tourists. Another popular waterfall is the Farin Ruwa Falls, located in Wamba Local Government Area of Nasarawa State, Nigeria, is one of the highest and most beautiful waterfalls in the country. The falls are about 150 meters high and this is another one of the main tourist attractions in the area. The waterfalls is surrounded by lush vegetation and is a popular spot for picnics and hiking. The falls is also a popular spot for bird watching, as there are many different species of birds that can be seen in the area.

The River Niger and the River Benue confluence is a popular tourist destination in Africa. The two rivers meet at the city of Lokoja in Nigeria. The confluence is a meeting place of two great rivers and provides a unique opportunity to see the different cultures and lifestyles that exist along the banks of the two rivers. The River Niger is the longest river in West Africa and the third longest river in Africa. It is approximately 4,180 miles long and runs through a number of different countries including Niger, Mali, Guinea, Ivory Coast, Burkina Faso, Senegal, and Nigeria. The River Niger is a major source of water for the people who live along its banks and is also an important transportation route for goods and people.

Including several species of birds, mammals, and reptiles.

Okomu National Park, formally called Okomu Wildlife Sanctuary is a protected area in Nigeria that is home to a variety of wildlife, including primates, reptiles, and amphibians. The sanctuary is located in the Edo State and covers an area of approximately 3,000 hectares. It was established in 1976 in order to protect the endangered red-capped mangabey, which is a primate that is endemic to the area. The sanctuary is also home to other endangered species, such as the Preuss’s red colobus and the Niger delta red colobus. In addition to its role in conserving endangered species, the Okomu National Park also provides a habitat for a variety of other wildlife, including several species of birds, mammals, and reptiles. Nigeria as a whole is a very beautiful country with many great places to visit. With its diverse landscapes of mountains, forests and beaches. If you get the chance make sure to visit some of these popular destinations.

7 incredible places to visit in Nigeria – With its many beautiful places, Nigeria is a place you must visit. – Express your point of view.

As beautiful as this places are, I’m sure we’ll have less than 10% of people from the world that will be willing to visit this places because everyone gets to hear the news about Nigeria . So before the government starts paying attention to tourism they should first pay attention to the security issue

Wow, I never knew we had this many lovely places in this country, I should try and visit these places more, plus I think they need to be broadcasted more or more awareness regarding them should be done to people at home and foreigners.

Nigeria is indeed blessed with a lot of resources.

Nature has its place in beautification, and these places will be fascinating to be.

Normally our country is a lovely place to visit, but people are just scared of our security issues. That’s why our tourism sector is not booming.

We are encouraging people to travel to Nigeria as soon as they have the opportunity and to make it a point to stop by some of these well-known tourist spots while they are there.

The nation is home to several ancient civilizations, and we are very specific of foreigners being intrigued by what we have, one of which being the Nok civilisation, which is recognised as being among the oldest in all of Africa.

Some of these tourism centers in Nigeria need revitalization to perform optimally so that they can serve the may purpose it been created for.

Nigeria is a place loading with so many resources. Our country is one of the most blessed countries in the world but we lack good leaders that can make judicious use of these resources to the benefit of the masses. We have so many tourist centers in Nigeria which our government can use to generate more income for the country. It is well with this Nigeria.

The entirety of Nigeria is a beautiful country home to a wealth of fantastic tourist destinations. Because of its varied topography, which includes beaches, mountains, and forests.

We might generate a significant amount of revenue from tourism if we took use of the fact that Nigeria is home to a number of iconic landmarks that are known all over the world.

It is a wonderful experience to travel through Nigeria. Our culture, and heritage are just some of the many ways in which we are abundantly rich.

If the nation’s security had been better, the tourism industry would have brought in more money for the government. If it weren’t for the civil war, Nigeria would be one of the most popular tourist destinations in the world.

Insecurity in our country is a great setback to our tourist places and many things in this country. These places needs to be renovated to draw attention of more foreigners too and make the places a great one.

The incredible places to visit in Nigeria, given above are beautiful places with lots of tourists attraction. If well utilized and conserved by the Government, it last for a long time and the country will generate revenue from tourism too.

There are many breathtaking tourist destinations and sites in Nigeria. Even more than these. Those in charged should work to improve certain areas so that even foreign visitors would find them more appealing.

There’s no doubt that there are beautiful places in Nigeria. But no one will like to sightsee in a country that’s not safe.that’s definitely of the major drawbacks of touring activities.

If only The Nigerian Tourism Development Corporation is performing their duty ,Then Nigeria would have made huge revenue from exploiting these tourist centers

Nigeria is a beautiful place for tourist. We even have more tourism places in Nigeria which was not mention above. Minister of tourism should try and develop those places in order to encourage more people even from other countries to visit.

We have so many places that are good for tourism in Nigeria but are undeveloped. The Ministers in charge of tourism should work more to leverage on this. It is a means for government to generate more income.

The 7 incredible places to visit in Nigeria, given in this news headline are wonderful places. It shows Nigeria too has tourist centers which indigenes and foreigners can come visit, to experience the beauty of nature. We should do well to conserve these places, so they can last for a long time.

Government would have been making decent revenue from tourism if the country was safe. Nigeria would have been on the map as one of the best place for tourism. Buh sadly…

Nigeria is a country with a beautiful landscape and lots of tourists attraction,just that out government are not tapping into our tourists side to make more money,If government can utilize this opportunities it will put Nigeria on the map as on of the best place with good tourists sites

Nigeria is a beautiful country to visit. We are rich in variety of ways in culture, landmarks, historical site and more. The listed locations are just some of the exciting places to see. We should be a country with huge tourism economy if the govt could keep the country safe.