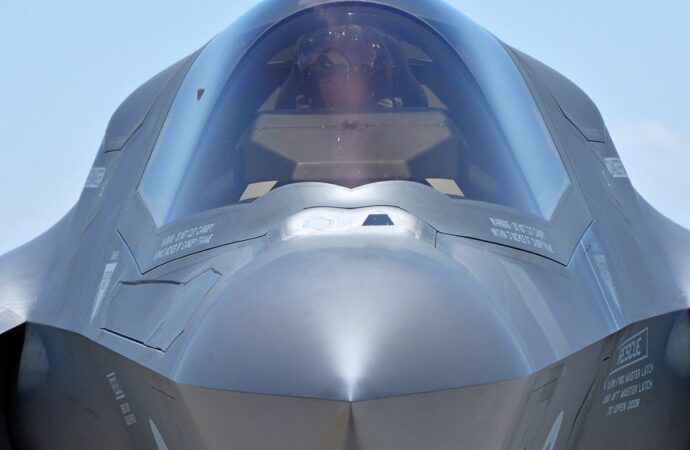 We used US jets, British intel to kill ISWAP leader, the Presidency has said.

The Nigerian Presidency has revealed on July 11th, 2022, that the Nigerian Armed Forces used United States fighter jets as well as British intelligence provided to them in the elimination of the leader of the Islamic State’s West Africa Province (ISWAP). The ISWAP is an Islamic militant group and administrative division of the Islamic State (IS), a Salafi jihadist militant group and unrecognized quasi-state, which means a political entity that is not fully institutionalized or autonomously sovereign.

The Senior Special Assistant to the President on Media and Publicity, Mallam Garba Shehu announced this in a statement which he issued as a rebuttal to some claims that the administration of President Muhammadu Buhari has failed to handle various challenges facing the country. The statement noted that the co-operation between the two world powers and the Nigerian military indicates that these countries have a new-found trust for the country’s present administration. In the statement, the Presidency noted that Nigeria, like every other country, is experiencing a period of adversity, suggestions that the Muhammadu Buhari administration has not made the country better than it found it, is “pure fantasy.” The statement stressed improvements on vital pillars such as the economy, security, and corruption.

The statement highlights the administration’s achievements.

In the statement, Garba Shehu highlights the achievements of Buhari’s government, one of which is that Boko Harm presently holds no territory in Nigeria. Part of the statement reads: The facts speak for themselves. On security, as recently as 2015, Boko Haram held territory the size of Belgium in Nigeria. Today, they hold no Nigerian territory to speak of. In March, our military eliminated the leader of ISWAP in an airstrike using US jets and British intelligence – this is a testament to the newfound trust our allies hold in our administration, not enjoyed by previous administrations.

“Moreover, our administration is the only one in Nigeria’s history to implement a solution to the herder-farmer conflicts through our landmark National Livestock Transformation Plan. Already, where ranches have been established under that initiative, we are seeing a sharp reduction in disputes.” The Senior Special Adviser (SSA) also disputed the claim that nothing has changed in the country much less getting worse under the leadership of Buhari. He said that under the Buhari administration, the situation of the country has improved.

The statement points out that corruption has been decisively dealt with.

The SSA observed that the administration has recovered hundred of millions in stolen funds from abroad and used these monies to fund social and welfare programs through which the funds were distributed to the poor during the COVID-19 pandemic. Which long delayed infrastructure, such as roads, bridges, railways, and power. On corruption, he said in the statement, “This is a direct result of Buhari administration’s initiatives such as our whistleblowing policy which empowers and emboldens Nigerians to report corruption without fear. Moreover, it again demonstrates the newfound trust our international partners have in Nigeria, thanks to the efforts of our administration. Those same partners refused to return stolen monies to previous administrations for decades, knowing it would simply be stolen again.

More importantly, what the Buhari administration has done is to place mechanisms to stop corruption from happening, that includes the strengthening of the office of the Auditor-General, enhancing the capabilities of the anti-corruption agencies by signing into law, several legislations and executive orders: the implementation of the Treasury Single Account (TSA); the implementation of public expenditure management and forensic accounting management systems, and several others. As for the economy, the unprecedented and vast infrastructure development driven by our administration has set the country on course for sustainable and crucially, equitable economic growth, while our policies for boosting domestic production of food and energy will be key to us navigating the global cost of living crisis.”

Shehu said that with the global supply chains disrupted by the COVID-19 lockdown and the ongoing Russia-Ukraine war, President Buhari put in place a food policy to grow what Nigerians consume in Nigeria. He said that this policy has prevented the growing food security threat which other nations find difficult to solve. “The president’s program has given the nation the confidence to ban rice imports, saving $5 million daily in forex. We have seen rice pyramids in many states including Kebbi, FCT, Niger, Gombe, and amazingly, Ekiti State.”

US Foreign aid kills ISWAP head – Presidency – We used US jets, British intel to kill ISWAP leader, the Presidency has said. – Express your point of view.

Last edited 4 months ago by Christiana
0

I guess this is not the Nigerian am in,Iswap operations are betting more Dearing day by day,which rice is that that is being sold as high as I can think off,this present government should device another means to all the problems on ground

The presidency lay claim to so many achievement, but why is the spat of killing increasing unabated. The recent Fulani herders men attack in Owo church.
The Treasury Single Account was proposed informer President Jonathan administration before it was adopted by Buhari administration.
The Bandits that operation in Kuje prison break use more than three hours for their operation right in Abuja the federal capital territory of Nigeria where the Aso Rock Villa is. What an irony.
The US dollars has triple it value under Buhari administration.
Farmers are afraid to go to farm for the fear of bandits, Fulani herders men, Boko Haram and the iswap.
The presidency should stop claiming what is not.
This present administration is the worst of all administration. Make dem pack their commot for office jo.

Kudos to the Nigerian army, if this is true. We need to become more brutal in our defense and attack against insurgency. We shouldn’t hesitate to act. Non state actors won’t take over the sovereignty of our own country. We will resist and fight them.

The presidency is saying that this current administration is performing.
We can all see clearly that the country is impoverished far more than ever before. The presidency is claiming that they have killed the ISWAP president and that was considered a great achievement on their part. They have forgotten that kidnapping is still going on; senseless killing by various terrorist groups including Fulani herders men is still going on in the country as we speak. The Northern Elders are agitating for the resignation of President Buhari because couldn’t control/stop the activities of these blood tasty terrorist. What are his achievement?

The fact that this government has under performed is evident. Our president has done nothing to improve the social and well being of the citizen so far he should just leave in peace.

Good job from our army. They should keep it up and let us hear mode heroic deeds like this and not bad news

Trying to cover incompetence with claims while killings are still happening everywhere.

Saying you are the first governance to curb herdsmen with cattle ranches is out of it.

And that doesn’t account for the life lost in during the administration.

Wow, so our military can be capable of carrying out a successful mission like this, I’m very shocked. more of that, please

Upon that he face on corruption and bandits matter, people are still suffering and the issue with the unknown gunmen keep escalating everyday. I think we need new government to take over.

They need to bring this ruthlessness and expertise in handling the bandits in the country so we can be safe.

ISWAP achievements or not, This country needs Improvements regarding security because the rate at which crime rate accumulates is very high. Solution need to be provided asap.

Who will believe what is coming from the presidency because in my view and thousands of the citizens nothing has change and even getting worse by the day.The insurgency has spread all over the country which is very alarming.

This is evidence that our Army and defence system are capable they modern equipment and facilities like the US fighter jets, and they will carry out their duties efficiently.

There is no denying the fact that the nation is significantly more destitute than it has ever been; hence, I have no idea what this Mr Shehu is talking about.

The action taking by the govt to tackle terrorism is lacking behind compared to other countries dealing with similar threats. Buhari govt has been silent for far too long to act against this atrocious group. We cannot rely on the words of the govt over this matter. Citizens of Nigeria should be aware and at alert all time.

All the talks from this man that they handled corruption are rubbish because corruption in this country is still as strong as ever; he should find another lie

The presidency is spreading false information since there have been no significant advances made to essential pillars like as the economy, security, or corruption.

The fact that the United States is willing to lend us their jets is evidence of the growing faith that our allies have placed in our administration, which is good.

I’m not sure it’s the same economy we have now that the presidency is talking about because our economy is currently at its worst state.

The presidency can not use its little talks to deceive us because this is the worst administration in this country. We need a quick change in power.

Our Army should be commended for carrying out this successful operation, and we should thank the US for the help they rendered.

They have neglected that kidnappings are still taking place and that numerous terrorist organisations still carry out needless killings. Both of these issues are just as vital as the ISWAP head.