Non-oil export income to be multiplied by 3x 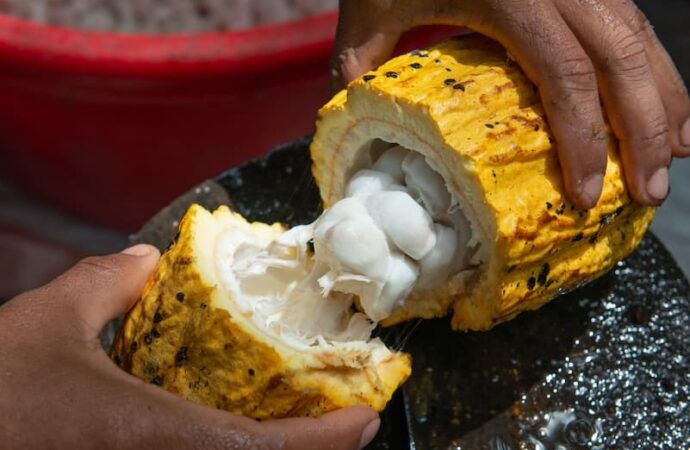 Nigeria is the fourth largest producer and exporter of cocoa beans worldwide.

According to Leadership checks, Nigeria ought to earn no less than $4 billion (N2.4 trillion) per annum, from the exportation of cocoa and leather, so as to meet the country’s foreign exchange needs. This was revealed amidst the reality that over 95 percent of the industry’s 4.2 billion volume in 2021 was controlled by 200 non-oil exporters. Due to the issue of scarce forex facing the Nigerian economy, the country struggles to meet its foreign exchange needs, thereby depending on the Central Bank of Nigeria (CBN).

Nigeria is recorded as a leading player in the global cocoa industry and being the fourth largest producer, it covers 6.5 percent share of global production. A projection has estimated the growth of production to 4 percent per annum in following years. Also, by 700 million USD, the country is also the fourth largest exporter of cocoa beans worldwide. The climate in Nigeria encourages production and supply of cocoa beans from October to June, enabling the cultivation of 1.4 million hectares of farmland.

Cocoa should generate $3 billion annually instead of $1 billion.

At the 2022 annual conference of the Finance Correspondents Association of Nigeria (FICAN), with the theme “Boosting Domestic Capacity for Sustainable Export Earnings”, which was held during the weekend in Lekki, Lagos. Renowned economic and finance experts spoke on the current developments, stating that the exportation of leather is supposed to fetch the country an annual income of $1 billion. While cocoa export due to its higher value, should earn beyond leather’s annual income, fetching $3 billion annually.

The managing director of Fidelity Bank Plc., Mrs. Nneka Onyeali-Ikpe, represented at the event by Isaiah Ndukwe, emphasized that regardless of the fact that currently cocoa exports bring an inflow of $1 billion into the country per annum, there ought to be a three time increase to $3 billion with value addition. Also stated was the need for industrialization, so much that there is an addition of value to agro based products, with the export value rising by three times after value addition.

Nigerian leather industry can increase its earnings by 70%.

With Cocoa and Cashew as case studies, Onyeali-Ikpe said that a step forward in their value chain by changing from cocoa beans to cocoa butter or powder and from raw cashew nuts to kernels would accelerate foreign exchange revenues by no less than three times. Cocoa and cashew exportation income will be multiplied by three times the amount in the short term to medium term. However, if there is an improvement in the capacity of plantations and processing, the numbers can be moved exponentially.

Also, at the event, Ominiabohs Jermila, representing the Bank of Industry (BOI), said that the potential of exportation in the country is vast. Leather happens to be one of the non-oil export products that generated the most revenue in 2020. A study carried out by the Nigerian Economic Summit Group in 2021 also estimates that the Nigerian Leather industry has the capability to increase its earnings by 70 percent, generating more than $1 billion by 2025.

The deputy Managing Director of the United Bank for Africa (UBA), Muyiwa Adeyemi, in his expression asserted that accountability for the 95 percent of the $4.2 billion is marked by 200 exporters. He affirmed that there was no large inclusion of informal exports in the wholesale trading in information, entertainment and solid minerals space that are unaccounted at the moment. It was further said that main items of non-oil exports such as cocoa, cashew, sesame seeds, hibiscus, fertilizers, tobacco, and hides and skins account for over 85 percent of total export, with UBA facilitating about 31 percent of the 2021 export volume.

This plans are going to go a long way to help save our economy. We should actually be exporting 3 times of whatever we export which is oil related exclusive. Let’s Imagine our refineries are working, subsidy will definitely stop. So with that, the remittances from oil will be focused on substantial purposes and not on paying of subsidy.

Nigeria government need to facilitate and make sure cocoa and all the farm produce are turn into finished produce so that the government and citizens can benefit more on the product because it will increase the revenue base of the government and also provide lots of work to the citizens.

This is essential. Diversification of the economy stabilizes the economy and help it grow. It’s an nice idea, we look forward to it.

The export of cocoa has proven to yield a very pleasing outcome years back and still profiting to invest on. The government should capitalize this great opportunity that can help improve the country deteriorated economy.

We have always been major exporter of cocoa and our government needs to do more and let’s maximize on the export for more revenue to be realize from cocoa export.

It is very encouraging to learn that Nigeria is ranked as a leading player in the international cocoa industry and is the fourth largest cocoa producer.

Our economy is suffering due to a lack of foreign currency, and as a result, the country has a hard time satisfying its requirements for this commodity. This is very unfortunate.

Cocoa export, because of its higher value, should earn more than leather’s annual income, which is approximately $3 billion annually; considering that this is a significant amount of money for our nation, I hope they put their attention on cocoa.

Reputable economic and financial experts commented on the recent events and stated that the exportation of leather is expected to bring in an annual revenue of one billion dollars for the country.

During the months of October through June, the weather in Nigeria is favourable for the production and supply of cocoa beans, which makes it possible to farm a total of 1.4 million hectares of land.

The government should have worked on diversification from way back, concentrating on oil income alone has made the country loose billions of naira

It’s exciting to know that the country is now diversifying in their economy, diversification is definitely what we need in this country to help to improve our economy

There was not a significant inclusion of unaccounted-for informal exports in the wholesale trading of information, entertainment, and solid minerals at this time. These exports are currently not accounted for.

Due to a shortage of foreign currency, our economy is suffering, making it difficult for the nation to meet its needs for this item. This is terribly regrettable.

There should be a high demand for industrialization has led to the tripling of the value of exported agricultural goods through the process of value addition.

We should at least be exporting 3 times of whatever we export. It will increase the revenue base of the government and also provide lots of work to the citizens.

Cocoa has been source for very beginning. Is just the government Of Nigeria focus more on oil. Government need to encourage farm base on fund

There are numerous ways that Nigeria can generate revenues. Bad governance is an inhibiting factor that prevented the full realization of these revenues. United Kingdom doesn’t have abundant natural resources like ours but are still able to create stability in their economy.
There is too much dependant on crude oil to generate revenue. Our government have failed to explore other means.
Government policies is also inhibiting factor in this regards. Federal Government should work on creating favourable policies.

Non-oil export income to be multiplied by 3x says by the incompetent Federal Government who lack the will power to make it a reality. I hope someday a better government will collect the mantle of power and take the country to the hight of prosperity and tranquility.

The multiplication of non-oil export income by 3x is proposed project by our Federal Government who I wish will be competent enough to make it a reality. Nigeria was once the leading producer of cocoa in the world but now we are in the fourth position. We need to focus more on non-oil exportable product to generate revenue for the country rather than depend on only crude oil.