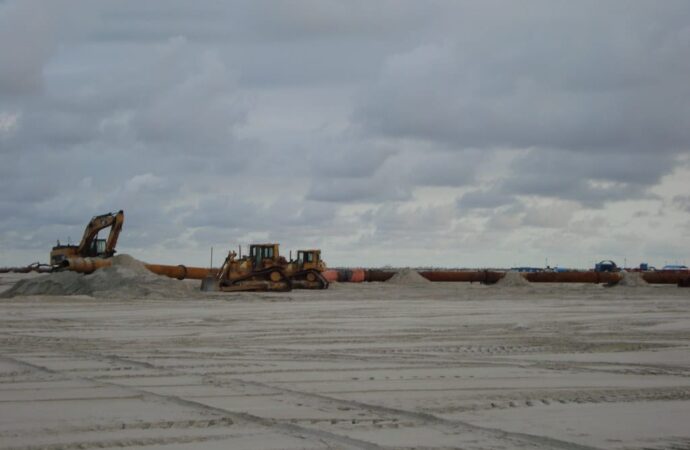 Infrastructure projects in this futuristic city are nearing completion.

EKO Atlantic City is a coastal city in Nigeria that is being developed as a world-class destination. The city is being built on land that has been reclaimed from the Atlantic Ocean, and it will feature a range of amenities and attractions that are designed to appeal to international visitors. The city is currently in the process of construction, and it is expected to be completed in the near future.

Originally this city was proposed as a solution to the flooding problem on Victoria Island in Lagos, Nigeria. The project involved the construction of a massive seawall that would protect the island from the rising waters of the Atlantic Ocean. The project was initially met with skepticism from many experts, who questioned its feasibility and questioned whether it would actually be effective in mitigating the flooding problem.

However, after years of construction and investment, the EKO Atlantic City seawall is now complete and is widely considered to be a success. The seawall has successfully protected the island from flooding and has allowed for the development of a thriving metropolis. Reaching 6km in length, this sea wall protects both Eko Atlantic and Victoria Island.

Construction on Eko Atlantic City began in 2008, the city is being built on reclaimed land off the coast of Lagos, Nigeria. When completed, it is projected to house up to 250,000 residents and include office space, residential buildings, hotels, shopping, and entertainment. The city is being built to help alleviate overcrowding in Lagos and provide a modern, sustainable community.

Housing and offices for a growing population.

The new city’s infrastructure is designed to support a growing population and economy. The roads and underground surface drainage pipes are independent of the city’s electricity grid, providing a reliable and sustainable source of power. The clean water and fiber optics infrastructure is also in place, providing residents with access to clean water and high-speed internet.

All bridges connecting Eko Atlantic have been completed and construction has begun on high-rises. This development is important because it will provide much needed infrastructure and connectivity for the growing city. The bridges will allow for better circulation of traffic and also provide pedestrian access to the city. The high-rises will provide much needed housing and office space for the growing population. This development is an important step in the growth of Eko Atlantic and will help to make it a thriving city.

Metropolis that will serve as a economic engine.

When completed, it is expected to house up to 250,000 people and generate up to a billion dollars in revenue for the Nigerian government each year. The project is being funded by private investment, with the Nigerian government contributing $6 billion. The project is expected to not only provide much needed protection for the city of Lagos from the effects of climate change and rising sea levels, but also to create a new, thriving metropolis that will serve as a economic engine for the country.