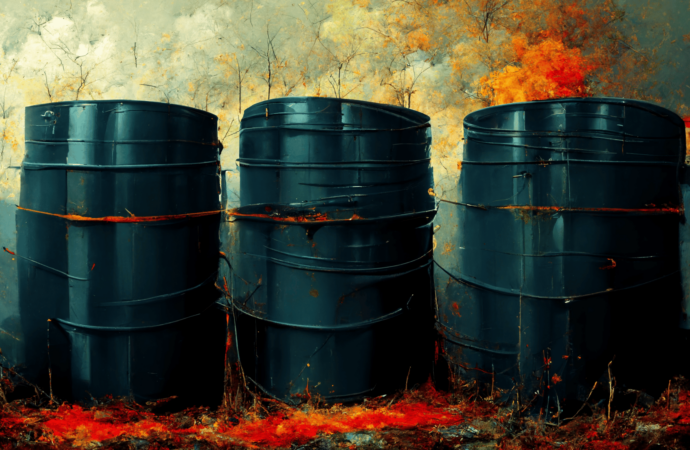 As Nigeria’s economy continue to take a hit due to oil theft, various government security agencies operating in different parts of the country have recovered stolen oil worth N86.2 billion in the month of August. On Monday August 22, 2022, 16,000 liters of diesel valued at N800 per liter (totaling N12.8 million) were reported to have been recovered by members of the Nigeria Security and Civil Defense Corps (NSCDC) in Cross Rivers State. The NSCDC Commandant, Samuel Fadeyi, told the press that the stolen Automotive Gas Oil (AGO, also known as diesel) were recovered within the last two weeks.

Also, on August 17, 2022, the Seme Area Command of the Nigeria Customs Service (NCS) reported that it intercepted almost 4000 (30-liter) jerry cans of Premium Motor Spirit (PMS), which is equivalent to 119,940 liters. The Customs Area Controller, Bello Mohammed Jibo, said that the products were about 4 tanker loads of 33,000 liters each. If the approved price of N191 per liter of PMS by the Nigerian Midstream and Downstream Petroleum Regulatory Authority (NMDPRA) is to be considered, Nigeria would have lost an estimated N161 million had the 119,940 liters made it to the Republic of Benin, where it was headed. The seized petroleum product had a Duty Paid Value of N28.9 million.

FG has spent Trillions on subsidy in the past 15 years.

Unlike in Nigeria where the Federal Government subsidizes petrol, a liter of petrol (PMS) is presently being sold in the Republic of Benin at N396. If the 119,940 liters had arrived safely, it would have been sold for at least N47M. Between 2006 and 2018 alone, FG spent the sum of N9.84T on petrol subsidy. As of 2022, N4 trillion more had been spent. A report in the media in July had estimated subsidies on petrol at N2T in seven months. A source had hinted that although Nigeria uses 60M liters of petrol per month, marketers had allegedly been loading up to 106M liters monthly as of April, smuggling about 46M liters of petrol monthly.

In the past week, the Nigerian Navy confirmed the arrest of a supertanker, MV HEROIC IDUN, by forces of Equatorial Guinea over alleged crude oil theft in Nigeria. The tanker was arrested after it fled from Nigeria’s AKPO Oil Field when its illegal activities were discovered by the Nigerian Navy. The supertanker’s International Maritime Organization number is 9858058 and it had the capacity of 299,995 metric tons (MT). A metric ton of crude oil contains a little over seven barrels. This means that the capacity of the tanker is about 2.1M barrels.

Nigeria would have lost N86.2 Billion in August alone to oil theft.

As of the time of the reports in the last week, Brent International sold at $96 per barrel. Bonny Light, which is Nigeria’s crude oil grade, usually sells for $1 above Brent. Assuming Bonny Light was $97 per barrel as of the time the reports were made, 2.1M barrels would have been sold for $204M, the equivalent of N86B. If the N161M that would have been made from the PMS seized at Benin Republic and the N12.8M from the recovered 16,000 AGO in Cross Rivers are added to the N86B intercepted by the Navy, Nigeria would have reportedly lost N86.2B to oil theft in August 2022 alone.

The chairman of Society of Petroleum Engineers (Nigeria Council) and professor of Petroleum Engineering at the University of Benin, Olalekan Olafuyi, told the press that 2000 trucks of crude oil are lost in Nigeria daily. He said, “Crude oil theft is a bad omen for the country. The Society is already discussing with NIMASA to see how we can strategize in terms of telling them the strategy that can be employed in monitoring production, because crude oil theft is quite huge. Imagine the country losing 500,000 barrels per day. One barrel is about 160 liters. One truck or tanker is 250 barrels. So, if you say we are losing about 500,000 barrels, you can imagine that we are losing about 2000 trucks every day.”

Oil theft all over Nigeria is now becoming a trend. It needs to stop. Our oil is our natural resources, it is the responsibility of the government to ensure it is safe and not stolen. Any one found culpable in involvement in this oil theft should be dealt with in accordance to the law.

Oil theft is a very habit is not good for development of any country because it will reduce the revenue and economy badly.

The oil theft need to be deal with iron hand see the alot of money recover from the oil theft. And this oil theft is affecting our economy ao government need to take step in other to stop oil theft

😂😂 Nigeria recovered stolen oil worth N86.2 billion in the month of August. Waw, who are this theft ooo.
On the 19th of May 2021. The Nigerian government has recovered over $700 million (about N288 billion) stolen funds stashed in foreign countries in the past four years. where is all this money self. what is government using this recovered money for? Where is the record.. Biko

Theft and Recovery… Is now trending this days.
It needs to stop ASAP.
ASUU has been on strike for good 7months several money recoveries has happened! what are exactly is the govt using the money for?
What is the essence of the recovered money that would eventually land in some people’s acct?…
I pray for God’s intervention.

Wow this is a wonderful news, more of this please. Now they can channel the income from the sale of the stolen oil to something good.

It is not a smart idea in any way, shape, or form to utilise all of one’s money to pay off debts, especially if those obligations are the result of subsidies. It poses a risk that might affect the entire nation. The government shouldn’t do that

Imagine the total amount we would have lost if the security agencies were lenient. Security around the petroleum sector locations and neighboring countries border should be strengthen well to avoid any slip off.

86.2 billion naira worth of stolen oil???? This is unbelievable, I’m just glad the government were able to retrieve it , kudos to the government

Our fellow Nigerians are the ones destroy our economy for us , these set of people are totally inconsiderate, the government should ensure they tighten their security and ensure people like this are being apprehended .

The oil theft is the main reason why Nigeria revenue is not increasing , those that took part in this should be properly punished

Just think of how much more we would also have squandered if the surveillance authorities had been lax. It is important to beef up security near oil refineries and the borders of neighbouring nations to prevent any untoward incidents.

When it comes to oil theft, a firm hand is required if one hopes to reap the financial benefits of recouping stolen funds. The government must act to prevent further oil theft, which has a negative impact on the economy.

Theft of oil is a widespread practise that is detrimental to the growth of any nation since it has the potential to adversely affect both the revenue and the economy.

2000 trucks of oil is lost daily? Like how?? Yet the government does see it deem fit to combat this financial draining event. Something doesn’t seem right. Good they recovered some billions. Hopefully they efficiently utilize it

Security at oil bunkers needs to be doubled because oil vandalism and stealing is becoming too rampant in the country, and doing this can reduce it.

Good job to the security agents that recovered this oil, now they need to be vigilant more than ever because these oil thieves won’t stop.

These are nice jobs done by the security agencies. Government should step up the search by going after the cabals who are actively involve in diverted our crude oil and restrict to the common man on the street.