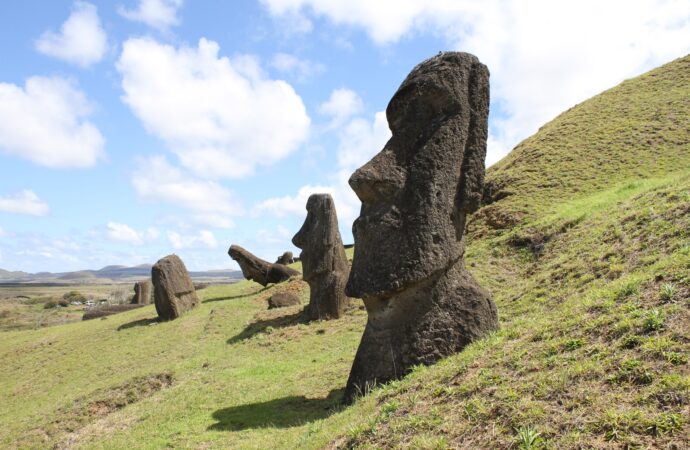 Deforestation rates are not sustainable, the past will show us the future.

Easter Island is a small island in the South Pacific that was once home to a native population known as the Easter Islanders. The first settlers on Easter Island arrived in 1100 CE. These early settlers brought chickens and pigs with them, they grew root crops such as potatoes and Yams, which helped to establish the island’s self-sufficiency. Easter Island’s location made it an ideal stopover for Polynesian voyagers. The island is famous for its large stone statues, called Moai, which were erected by these Polynesian farmers. The island was also home to a unique form of hieroglyphic writing, called Rongorongo.

The Polynesian farmers were a peaceful people who lived in harmony with their environment. They brought with them plants and animals, they cleared forests to make room for agriculture, and they hunted the island’s animals for food. However, over time, the population of the island grew, and the resources on the island became strained. These changes quickly began to impact the island’s ecosystem.

This process continued until their resources depleted.

Deforestation on Easter Island began to occur more frequently as the population began to grow and they needed more land for farming. The nutrients in the soil on Easter Island are scarce, meaning that once the soils nutrients were depleted, they would need to find new land to farm on. Other reasons for deforestation were for housing needs, fire, and the erection of the Moai statues. In order to move the statues over great distances, they would use thousands of logs placed under the statue to roll it across the land. Theories state that this process continued until their resources were depleted and nothing was left.

The Easter Island forest clearing is a prime example of human-induced environmental change. The clearing of the forest for agriculture and other purposes has led to the loss of much of the island’s natural vegetation. This has in turn had a number of negative impacts on the island’s ecology, including the loss of habitat for native wildlife, the increased erosion of the island’s soils, and the deterioration of water quality. However, this theory does not explain why the forest was not replanted after it was cleared. Another theory suggests that the clearing was caused by a natural event, such as a volcanic eruption.

Without the trees, the desert will quickly take over.

Nigeria and its current practices will lead our country down the same path. Nigeria is facing a number of environmental issues that are causing alarm among many people. One of the most pressing issues is the rate of deforestation. This is happening due to a number of factors, including the practices of farmers and herders, as well as the growing population. Deforestation is a problem because it leads to a loss of habitat for many animals and plants, as well as a loss of carbon sinks. This can contribute to climate change. In addition, deforestation can lead to soil erosion and a loss of fertility. This can make it difficult for crops to grow, and can lead to a loss of livelihood for farmers. The rate of deforestation in Nigeria is unsustainable, and something needs to be done to address the problem.

Nigeria is home to many different types of trees, which play an important role in keeping the desert at bay. The trees help to hold the soil in place, which prevents the desert from encroaching on populated areas. In addition, the trees provide shade and shelter for people and animals, and help to regulate the local climate. Without the trees, the desert will quickly take over and the people of Nigeria would be in danger of losing their homes and livelihoods.

Deforestation rates can double in the near future.

An estimated 350,000 hectares of land are lost every year to this phenomenon, which also results in increased rates of deforestation. The current rate of deforestation in Nigeria is 3.5%, but this could easily double in the near future as the frequency of climate change-related weather events increases.

Nigeria is slowly becoming Easter Island – Deforestation rates are not sustainable, the past will show us the future. – Express your point of view.

We should stop cutting down trees. They even help with Oxygen too