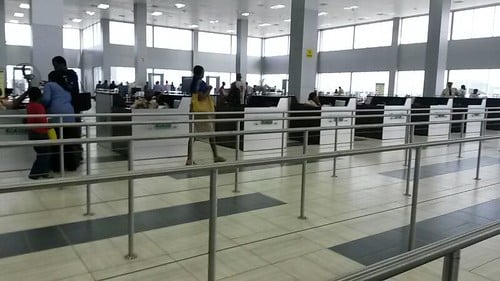 It appears there are various issues companies have with the new airport.

This international Terminal is a world-class facility that offers travelers a wide range of amenities and services. The MMA2 is equipped with the latest technology and infrastructure, making it one of the most modern Terminal in the world. It offers a variety of shops and restaurants, as well as a wide range of transportation options. The MMA2 is a convenient, comfortable, and safe place to travel.

To reduce the amount of time that produce spent in transit.

The MMA2  was built in response to the growing needs of the region. It was designed to replace other airports that were no longer able to meet the demand. The MMA2 is located in Ikeja, Lagos State, Nigeria. It will be the busiest Terminal in Nigeria and handles the majority of the country’s international traffic.

This MMA2 was conceived as a way to improve the processing and shipment of produce and other goods, in and out of the country. Backlogs at other airports were causing produce to sit around for days and slowly spoil. The new MMA2 was designed to be more efficient and reduce the amount of time that produce will spend in transit.

The old airport is outdated and doesn’t meet deadlines.

Not every company is willing to switch over to the new MMA2. Some parties have reservations about moving, citing the new MMA2 efficiency as the primary concern. However, the new MMA2 is much more modern and efficient, and is thus expected to eventually replace the old airport entirely (terminal 1). The old airport is outdated and doesn’t meet the needs of the companies or the passengers. The new MMA2 is a better option for all parties involved and estimated to process 14 million passengers yearly comfortably.

It is advisable for companies to voluntarily make the switch.

Nigeria is home to a number of airports that are in need of improvement. In an effort to make the country’s aviation infrastructure more modern and safe, officials have been urging companies to move their operations to the new MMA2. While no formal moves have been made to force companies to comply, it is likely only a matter of time before such measures are put in place. In the meantime, it is advisable for companies to voluntarily make the switch to MMA2 in order to avoid any potential disruptions down the road.

MMI Airport snubbed by companies – It appears there are various issues companies have with the new airport. – Express your point of view.

I feel the other companies should make the new changes making MMA2 efficient there primary concerns and also work toward achieving something like that. If they can also upgrade to MMA2 level it will make things more easier around and also develop us more

I’m happy our airports are now meeting international standards. The MM2 is example of such a great feat.

With time the companies will definitely switch over to MM2 that’s Nigeria system they are taking their time.Influx of more activities will commence there

Good to hear that we now have an efficient international terminal, am sure with time all these companies will move there operations to MMA2 when they see the level of efficiency out there

companies should focus on making MMA2 more useful as their top priority and should also work toward achieving that goal. It would be more convenient for everyone if they could upgrade to MMA2 level as well.

This will benefit many people; companies should jump on this quickly, please. Government should persuade them

I guess lack of trust is part of the reason why some companies don’t want to switch.

The government should emphasize more on its benefit so companies can give it some thought.

Why are companies doing this? Don’t they want progression in there line of duty? This is very bad and sad

Nigerians loves traveling a lot, so good initiative by the government to think about establishing this new airport, at least they have small sense now

These companies are crazy, do they want to be begged first before they join or what? Something that will be very beneficial to their organization.

Companies will eventually move to the Nigerian MM2 system, but they are probably taking their time. There will soon be a wave of new activities going on with them.