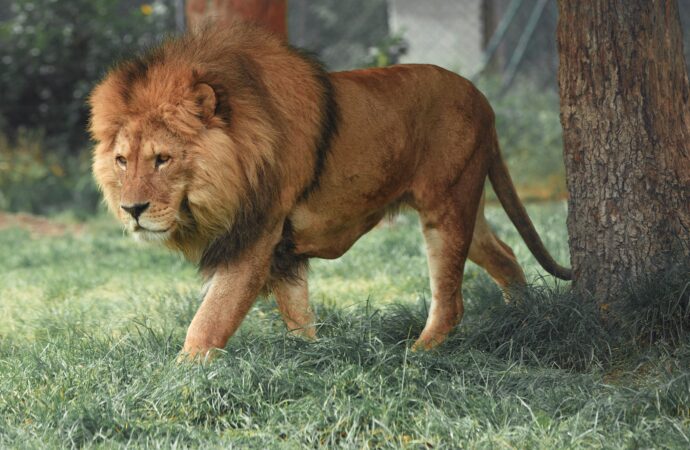 Lion, Panthera leo, is one of the world’s most popular and charismatic species. It is usually found in Nigeria, and some other parts of West Africa and Central Africa. However, a report made it clear that this species of animal is on the brink of extinction. A UK-based conservation group LionAid recently gave a report that states that the lions remaining in the wild in western and central Africa are as few as 645.

The report further states that lions are already extinct in 25 African countries and virtually extinct in 10 other African countries; 34 are left in Nigeria. While in the African continent, an estimate of 15,000 wild lions are remaining, compared to 200,000 in the past three decades. Lions, despite being under the classification of vulnerable on the IUCN Red List , have a small and fragmented population in West Africa, which have been recently classified as critically endangered.

90 percent of the original range of lion is lost in Africa.

Recently, genetic studies have introduced the difference that exists between West African and Central African lions, and South Africa and East Africa. The studies further suggest that lions in West Africa would likely merit distinct taxonomic status. Unlike the former widespread of this species, there are only two sites in the country, Kainji Lake National Park and Yankari Game Reserve, which accommodates the 34 surviving lions. Asides in these two places, there are no lions present in Nigeria.

The World Conservation Society (WCS) mentioned that over 90 percent of the original range of lion, have been lost in Africa. According to the society, the major threats confronting lions and making them extinct, are reduction of wild prey and retaliatory, habitat loss and degradation, and illegal killings of lions. Habitat loss, particularly, has led to some West African countries being depopulated and isolated. The report, however, leaves Nigeria with an estimate of fewer than 50 lions.

In addition, WCS blames the extinction of lions on increasing human populations, and the widespread of subsistence and commercial-scale agriculture. The group also mentions climate change as a factor, and the absence of population connectors as a result of the expansion and spread of agriculture, development, and huge infrastructural projects. The aforementioned factors, therefore, in their report, have led to the depopulation, fragmentation and isolation of some countries with small populations, particularly in West Africa.

Nigeria, however, links the reduction to the serious depletion of their natural prey, as a result of hunting and habitat loss. Having lost their natural prey, lions are left with the options of feeding on domestic livestock, while in some occasions, there is the poisoning of livestock carcasses during human-lion conflict. Likewise, rapid human population growth and agricultural growth leads to an unprecedented influx of nomadic livestock into shielded areas as a result of the disappearance of other grazing reserves.

Communities should be made custodians of Nature.

Dr. Peter Lindsey, Director of the Lion Recovery Fund (LRF), stressed the illegality of bushmeat poaching, describing it as an unlawful medium of hunting wildlife for meat, be it for personal consumption or for sale. It is often considered illegal because the hunting is carried out within protected areas and with no license using prohibited traps and snares. He further stated that efforts should be made, to enable the engagement of neighborhood communities around protected areas to be stationed as allies in conservation and as custodians of nature.

We don’t conserve our wild life enough here in Africa, particularly in Nigeria. These animals should not be going into extinction. We should stop destroying their habitats. The different agencies regarding wildlife conservation should look into this gradual extinction of lions.

As a result of their status as an endangered species, the lion population in West Africa is both limited and dispersed and this is bad

Reduced wild prey and retaliation, habitat loss and degradation, and lions being killed illegally are the main dangers to lions that lead to their extinction.

Little or no attention is being paid to these animals, the west African government should collaborate to put an end to illegal killing of these animals

widelife conservation is one thing we lack in this part of Africa, whereas we need it to restore, protect or enhance natural ecosystem

Illegal killings of animals has led to Extinction of most animals,and all these animals are useful to survival of natural habitat.Enough needs to be done to keep these animals safe.

Africa country’s and their govts should work hand in hand to go against illegal killing of these animals. They should stop destroying their habitats.

We need to maintain standard widelife conservation in this region of Africa if we want to restore, safeguard, or improve the natural ecosystem and avoid illegal killings of animals.

This is sad because these wild animals are also part of what makes Africa a good tourist destination.

Retaliatory killing and a decline in the number of wild animals available as prey are the two primary factors driving the extinction of lions.

Particularly the destruction of habitat has resulted in several countries in West Africa becoming depopulated and isolated, which has led to the extinction of lions in certain countries.

People have been killing lions a lot illegally especially when they hunt, that’s why the lions are becoming extinct in Africa

According on the findings of the study, lions living in West Africa should probably be assigned a different scientific category.

It is frequently regarded illegal because the hunting takes place within protected areas without a licence and makes use of forbidden traps and snares. These factors combined make it impossible to legally harvest the animals.

Recently, a lion wandered away from Yankari Game Reserve in Nigeria to a neighboring country and was killed. Effective law should be put in place and effort to control poaching activities of humans since this very animal is an endangered species.

The rise in human population in Africa, combined with the continent’s extensive adoption of agriculture on both subsistence and commercial scales, is responsible for the extinction of lions in that continent.

This bush meat syndrome that we have in Africa will cause all these endanger species to be extinct. The law against poaching should be enforced to control this human activity otherwise in the next five to ten year African lions may not exist again.

The rate at which wildlife are going to extinction in Africa really need to be look to by concern authority by both international organisations responsible for wildlife protection and the government of each country in Africa,if not many of these animals will totally go on extinction.