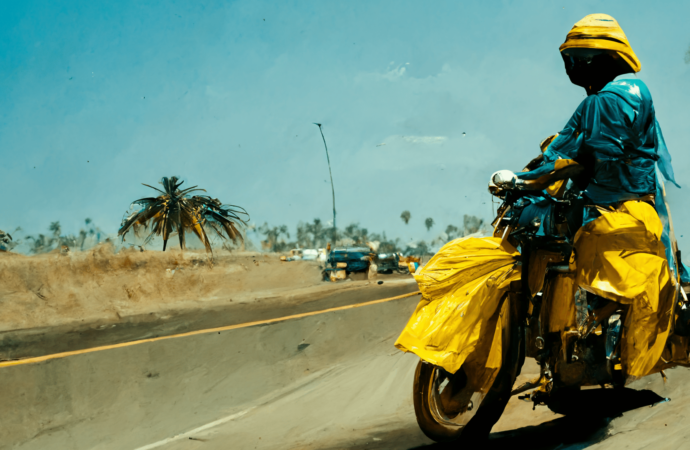 Lagos State Government (LASG) is considering a total ban on motorcycles (popularly known as “okada”) in all local government areas (LGAs) and all local council development areas (LCDA) in the state. The Commissioner for Information and Strategy, Gbenga Omotosho, disclosed this at a stakeholders’ forum put together by the government to review the ban on commercial motorcycles in parts of the state. The Governor of Lagos State, Bababjide Sanwo-Olu, had on June 1, 2022 banned the operation of commercial motorcycles in six LGAs and nine LCDAs in the state.

The six LGAs are Ikeja, Surulere, Eti-Osa, Lagos Mainland, Lagos Island and Apapa. The commissioner said that after the people started seeing the results of the ban in the six LGAs, the people of the state had been asking the government to expand the ban statewide. He noted that negative criticism on the ban were made by people who had not witnessed the havoc that okada can wreck. “Some people have suggested that the ban should be statewide, considering the present anxiety over security,” he said.

Omotosho said all stakeholders can make suggestions on LASG’s decision.

The commissioner continued, “Residents are being robbed of their belongings by robbers who used motorcycles to flee scenes of crimes. Our public hospitals are filled with victims of okada accidents, doctors had their hands full at emergency wards, and hoodlums who rode unregistered motorbikes posed great security risks.” In the same vein, he said that all concerned stakeholders in the state now have the opportunity to make suggestions on what steps the government should take on the matter.

The Commissioner for Transportation, Dr. Frederic Oladeinde, who also attended the forum, said that the ban had recorded significant successes and compliance in the state. He said, “In the affected areas within the period under review, available records show that crime and accident rate reduced astronomically by 86 percent and 63 percent, respectively, while a total of 7,500 motorcycles were impounded and crushed accordingly.” He emphasized that the rise in insecurity nationwide has made it necessary to review the effect on the ban on motorcycles in parts of the state in a bid to protect the residents.

While Lagos State Government has banned motorcycles in the four more LGAs, the commissioner said that the Federal Government is considering a total ban of motorcycle in the federation. He said, “The Federal Government is presently considering the total ban of motorcycle operations across the federation as most of these underground activities are being enhanced with the use of motorcycles.” Meanwhile, as the FG does this, Governor Babajide Sanwo-Olu has approved a total ban on the activities of commercial motorcyclists in four additional LGAs and respective LCDAs of the state, which will commence from September, 1, 2022.

Sanwo-Olu had on May 10, 2021, reviewed the 2012 Lagos Traffic Law guiding the Okada operations, after former governors, Babatunde Fashola and Akinwunmi Ambode’s administrations had banned their activities. The Commissioner for Transportation, Dr. Fredric Oladeinde, and Commissioner for Information and Strategy, Gbenga Omotosho, announced the fresh ban at an inter-ministerial media briefing on August 18, 2022, held at Alausa, Ikeja. The latest affected LGAs are Kosofe, Ikosi-Isheri, Oshodi-Isolo, and Mushin, including the respective LCDAs in the areas.

In January 2020, the Lagos State Government had banned the activities of commercial motorcycles, popularly called Okada, and tricycles, known as Keke Napep, in some Local Government Areas, bridges, and highways in the state. This had majorly affected the popular motorcycle business, Opay. The state had embarked on total enforcement of the state’s Transport Sector Reform Law of 2018 on the affected six LGAs, nine LCDAs, and 10 major highways across the State with effect from February 1, 2020.

Before the government announce total ban on okada or tricycle,they should have provide alternative transportation system in those are because this will cause lot of harvoc on the citizens

In as much as the government are banning okada due to their reckless way of riding which is a good development because there have been reduction in accidents,robberies and other bad vices but are the government considering other alternatives for road users in Lagos State especially workers, children going to school and other activities.

Banning okada is a good step because of a lot of incident like accident due to reckless driving, robbing and other criminal activities but this okada is source of income of some people banning okada permanent will affect them I urge the government should find alternative to this

Actually if the motorcyclist still not obey the traffic rules and be very careful with their passengers the band might be extended to the whole state. I think they should be enlightened and educated so they can understand how they are supposed to work. So if they don’t change, then he the government can band them throughout the state.

Government should have look into this issue of banning okada very well before taking a decision. Have they provide another means of transportation in some area that is only Okada that can go through those area. Some part of Lagos is very jam-packed and over traffic( hold up) is only okada that more faster. Please Government of Lagos should look at this issue of okada again before finally decision

The government should not make any rash decision, they should give this a rethink, I’m not against them banning motorcycles, but banning it in some area will not make any sense as they might not have other means of transportation,

Banning motorcycles would not be a bad idea. A lot of people have lost their lives due to the reckless driving of this Okada men, the government should just provide a substitute means of transportation.

Expanding the ban all over the country is not a good idea. Many people will loose there means of earning and more will suffer as there are some road that can only be pass on with motorcycle.

Honestly, I am in total support of the ban of motorcycle but provision should be made to alternative means of livelihood for the okada riders otherwise crime in the state will take a new dimension.

Lagos has experience less accident and crime rate after the ban of okada in some certain areas. If Lagos State want to totally ban okada then provision need to be made to cushion the effect on okada riders enhance we risk crime taken a new dimension in Lagos.

The rationale behind this ban still doesn’t make sense to me. So you combat insecurity by banning their means of transport?? So what happens if they get another means of transport, they ban that too? Did they even weigh the pros and the cons?? I mean not everyone has a car, and bikes serve as an effective means of transport especially in rural areas. It’s also serve as means of employment. How can you make thousands of people jobless all at once to curb insecurity, do these guys think??

I agree with the government on this banning of motorcycles because they have caused a lot of accidents on thee street of lagos and this ban can help curb it.

The ban has my full support regarding motorcycle. The govt should find deserved alternative for the victims. They should be enlightened and educated so they can understand how they are supposed to work and earn a good living also.

People who have not seen the devastation that can be caused by okada are the ones who are criticising the ban on okada. If they havr seen it, they wouldn’t be suggesting that the government shouldn’t ban it because they would know better.

The spike in insecurity on a national scale has made it necessary to reevaluate the impact of a restriction on the operation of motorbikes in certain areas of the state in an effort to ensure the safety of the local population.

Concerned parties in the state now have the chance to provide their input regarding the actions that the government should take regarding the issue in order to improve the country as a whole.

The vast majority of these covert and unlawful actions in Lagos are made easier to carry out thanks to the utilisation of motorcycles. This is a good ban

This ban on okada in Lagos is particularly beneficial because it has seen a substantial amount of success and compliance in the state.

This ban on okada will help reduce the violence on the street from thugs and hoodlums and it will make the environment better.

A study of the impact of the motorcycle prohibition in some areas of the state is now necessary because of the growth in national insecurity, in an effort to safeguard the locals.

The government should provide job opportunities for these okada riders so they will not turn to a life of crime.

I believe Lagos motorists need more information and training so they can safely use the city’s roads. Therefore, the state government can institute a ban on them statewide if they do not alter their behaviour.