Food inflation in Nigeria rises to 18.37% 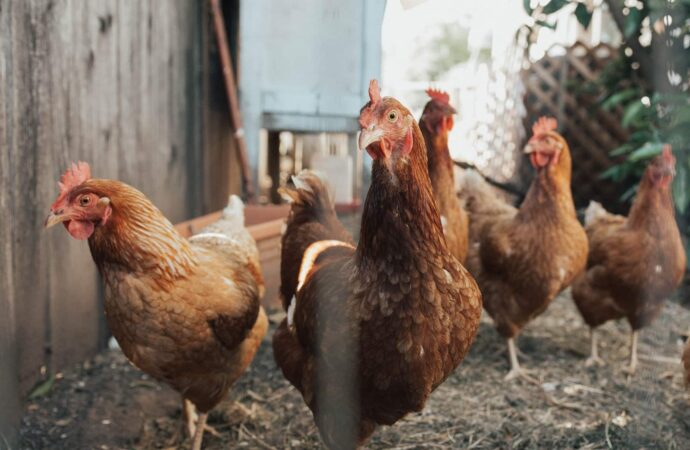 Hike in poultry feeds leads to increase in prices of poultry products.

According to data from the National Bureau of Statistics (NBS), food inflation in Nigeria has risen to 18.37 percent in April, in between increment in the prices of staple food across the country. The rising inflation has also contributed massively to the poultry industry, increasing the cost of poultry feed by about 168 percent, amidst continuous rise in the prices of feed ingredients which are maize and soybean, and increase in the cost of production.

The inflation has also affected the prices of poultry animals and products, for instance, a broiler is now being sold at the rate of N5,000 to N7,000, compared to the rate of N1,500 to N2,500 for which it was being sold in 2018. The price for a crate of egg has also skyrocketed from N800 to N1,800. As a result, experts believe that the aforementioned instances are surges that underline the scale of Nigeria’s food inflation, in the past few years.

The poultry sector contributes 10% to the National GDP.

Market surveys by the Centre for Journalism and Innovation Development (CJID) revealed that 25 kilograms of poultry feed, derived mainly from maize, soybean, wheat, and millet, increased in prices from about N3,600 in 2019 to between N8,500 and N9,000 in July 2022. The inflation of food commodities are as a result of several factors which include the shutting down of borders, in 2019, to stop smuggling and improve rice production; pandemic lockdown; depreciation of naira; insecurity; and high fuel prices.

Commenting on the situation, Ezekiel Ibrahim, the National President of Poultry Association of Nigeria (PAN), stated that the price increase surge of 168 percent surfaced due to challenges faced by poultry farmers across the country. In his words, the Nigerian poultry industry is worth about $4.2 billion, contributing almost 10 percent to the National GDP, and remains the major source of protein for a population of over 200 million people. However, the inflation has made many operators abandoned their businesses, leaving the sector to struggle.

Insecurity and high cost of animal feeds send farmers out of business.

In addition, the PAN President said that the development that is currently going on in the poultry sector of the country concerning hike in prices of animal feeds and cost of production due to shortage of foreign exchange is the reason for the persistent higher price review for approval of a new selling price for a crate of eggs by poultry farmers. This is done in order to prevent the industry from imminent collapse and also to keep members in business.

A poultry farmer, and Chairman of the 2021 Show for South West States, Mr. Olalekan Odunsi, likewise acknowledged the fact that poultry farmers are being confronted by diverse socio-economic challenges, which threaten the industry’s trajectories. He mentioned insecurity, high cost of animal feeds and exchange rates as major reasons why some poultry farmers are no longer in business, thereby bringing a reduction to the number of poultry farmers who produce eggs, chickens, and other products.

Nigerians should get prepared for a hike in poultry products.

Another major impediment to poultry production is foreign exchange. Majority of ingredients used to produce animal feeds such as additives, multivitamin, medicament, and others, are usually imported, while maize and soybean are grown in the country. However the cost of production, it is the duty of poultry farmers to ensure that people get to eat proteins. Considering the challenges faced by the poultry industry, Odunsi told Nigerians to get prepared for a hike in the prices of poultry products.

The hike in the food sector is too much. We are not just battling food inflation but also scarcity of food. The government needs to do better at the circulation of poultry feeds for farmers, so the food inflation can reduce.

The price of chicken feed has increased significantly as a direct result of growing inflation, which has had a significant and unintended impact on the poultry business.

Inflation is to blame for the high pricing of feed materials like maize and soybeans, as well as the increase in the cost of production overall.

The inflation has caused many business owners to close their doors, which has left the sector in a precarious position.

Regarding the recent spike in the cost of animal feed, the poultry industry of the country should be making progress toward a solution at the present time.

The inflation rate in this country is going out of hand. I don’t even know the next thing in this country. Feeding in Nigeria is something else. A lot of people are leaving in hunger. The rate of begger has increase. Poverty is getting much

Inflation has affected practically every thing. The government are doing almost nothing, and the situation of the country keeps getting worse

The cost of foreign currency is a significant barrier to entry for the poultry industry. The vast majority of the components that go into the manufacture of animal feed, including additives, multivitamins, and other components, are often imported.

The poultry industry is very important to us in this country because it remains the major source of protein for us. The industry should be preserved

The government has to find a way to resolve this inflation issue because if is seriously affecting a lot of things in this country. May God help us

Everything is getting more and more expensive in this country and it’s not like people’s earnings and salaries are increasing.. things are too hard in this country

Inflation continue to pose an impediments to almost every sector and making things hard for the people. Our government should try to put in every possible way to mitigate this issue as soon as possible.

Things are just becoming more expensive. The economy is just moving from bad to worst. We just have bunch of incompetence hands in our government. God will deliver us.

what is really happening in Nigeria virtually everything we eat is on the increase,which way my dear country, Poultry food again despite the exhorbitant prices we buy egg..We need urgent solutions in all sectors.

The hike in food stuffs in Nigeria will continue to rise everyday,insecurity has makes alot of farmers not to cultivate anymore and government is not doing much to curb the menace.

When you have incompetence set of people in the government these are results we will get. This administration is filled with all kinds of abnormalities. Hike in the prices of commodities are the result. Please, is your PVC with you? Get it ready for 2023

Inflation has made many business owners abandoned their businesses. The government should find solution to this inflation issue because sincerely it has affected a lot of things in this country.

The price increase in the food industry is excessive and In order to lower food inflation, the government must improve the distribution of chicken feeds to farmers.

The cost of living continues to rise, while the state of the economy continues to deteriorate. Unfortunately, our country is run by a group of inept people, and unless something changes soon, we will all perish.

Food inflation is something that must be dealt with and fast because food is basically what is keeping people alive in the country and without access to it bad things will happen.