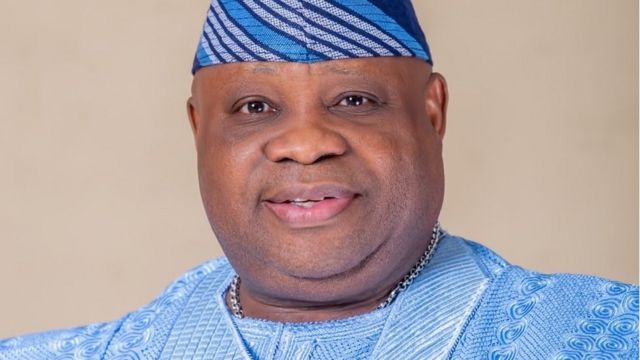 The just concluded governorship election in Osun state saw the Independent National Electoral Commission (INEC) formally declare the People’s Democratic Party’s (PDP) candidate, Ademola Adeleke, winner, where he defeated Gboyega Oyetola, the incumbent governor and candidate of the All Progressive Congress (APC). Recall, Oyetola won against Adeleke in 2018, after the Independent Electoral Body declared the election inconclusive. This election which recorded a massive turnout of voters was an evident illustration of the willpower of the people towards demanding a fitted social change.

The People’s Democratic Party (PDP) was reported to have been intimately keeping taps of the results of the election against it being tampered with, where they recalled the tricky situation of the previous election in 2018 that saw Adeleke lose to the incumbent governor, Oyetola, after a rerun even though reports pointed to him leading the APC candidate at the polls. While the governor-elect appreciated the contributors for his victory, he encouraged the electoral body to continue exhibiting transparency in its endeavors to ensure that the presence of free and fair elections.

While the governor-elect, Ademola Adeleke is expected to be inaugurated on the 27th of November, he has however installed a transition committee that is saddled with the responsibility of evaluating the current structures in the state, so as to ease his government as he hits the ground running. Inaugurating this committee on Thursday, Adeleke urged them to work very hard with immense innovation and be creative towards achieving their set objectives because the success of this committee will pivotally help the incoming government with important directives.

At the inaugural ceremony, Senator Adeleke asserted that the transition committee must help the incoming government in ascertaining the figures and facts of Osun state’s general state of affairs. The committee is to evaluate the state of Osun’s general finance, including the funds from federal allocations, grants and revenues generated internally, as well as other sources that fund the state’s finances. The committee is also charged with teaming up with individuals and groups in passing across information that is important for the socio-economic growth of the state.

Committee will also offer appropriate solutions to the governor-elect.

The committee will look to assessing the state’s debt and local government, bringing forward, the best possible ways for the repayment of these debts. It will also evaluate the structure of government in the state, while making the appropriate recommendations to the governor-elect. Reviewing the educational, agricultural and health sectors and finding possible solutions to salvaging the discrepancies that affects these sectors. The committee will also work with the incoming administration by proposing a feasible agenda and evaluating the state of the Osun’s labor force and welfarism, salary payment and gratuity.

In pointing out these tasks, Senator Adeleke stressed that the tasks were quite sensitive and time-bound. Thoughtfully, this transition committee will work with the current administration in reviewing the capital projects planned and commenced by the correct administration, so as to ascertain the stage of completion and providing a balanced projection of media for the incoming administration. It will also review the security system in the state and work with security agencies on improving the security structure of the state.

Need for a mix of competent citizens in state affairs for the committee.

The governor-elect asserted that the establishment of this committee was heralded by his desire to make sure there is a mix of competent citizens in the affairs of the state. He further noted that the committee must help the incoming administration with practical and innovative approaches in salvaging the problems that Osun state is ravaged with, so as to ensure a seamless transition in governance. He also stated that by entrusting them with a huge task of transforming the situation in the state, the citizens of Osun expect so much from the incoming administration and with access to the needed skill sets, they are absolutely ready to meet the demands of the people.

What is the essence of the 37 transition committee they all are Sam thing they are there to syphone all the money that would be put into the committee enough jamboree,,transition my foot for the new government to work effectively all have always been of no use.

Congratulations to him once again. Wish him and the people of Osun good luck. Hopefully his tenure brings joy and satisfaction to osun residents.

Okay this is a good way to start. Whatever the committees conclude with, I hope the governor- elect will not recuse himself from it. They need to hot the ground running in Osun state once he has taken the oath of office.

The incoming governor is off to a fantastic start. It’s an indication that his upcoming administration has a good prospect. We will all have to wait and see what lies in store for the people of Osun state.

Congrats, he can proceed with his plan for better change, he and his 37 number of committee, all the best. My pray him is for him to deliver well to his people

Given how he has set up the state’s economy and security, the newly elected governor of Osun state appears ready to restore the state’s glory days and its people.

The Osun state governor-elect Adeleke has swing into action. That is good news. He needs to be very careful in choosing those that will work with him.He needs to go for competent hands, technocrats who can help in managing and restructure the state. I congratulate him for his success as the governor elect of Osun state.

Osun state governor-elect should wisely those that will help in running the affairs of Osun State. He should choose base on sentiment otherwise it will create a loophole in his government.

This shows the upcoming administration has a good prospect. Also he need to be very careful in choosing those that will work with him. Everyone won’t accommodate his decision..Congratulations in advance to the people of osun anyways.

There’s no doubt that the governor elect will do a good job. This is an impressive startup decisions. And congratulations to him on his well deserved win.

I’ve never doubted senator Adeleke’s ability. He’s making a good decision by segregating this duties, this will definitely make the work easier for him.

If there’s one thing I’m proud of till now, it has to be the free and fair election that took place in osun state. I’m glad it wasn’t compromised this time around.

This is a very good idea that the governor elect is working on. If he keeps up with this project I’m sure he will have the best administration.

Last edited 4 months ago by Christiana
0

The incoming government in Osun state will face serious challenges because the state is seriously indebt and government is a continue thing in which a responsible government should provide basic things for her citizen.

Wishing him a very big congratulations once again and this first step he has taken is in the right direction, I hope he does well.

This is a pointer that Adeleke will surely lead good governance.

It is of high importance to understand the situation on the ground first, before dabbling into it.

This administration needs the support of the people to achieve greater things.

May God guide him into taking the right paths that will move osun into greater heights. Congrats once again

It’s very good that is committees are looking at ways for resolving the debts of the state, that will help in balancing things for them.

If this committee is successful, it will be of critical assistance to the newly elected administration in carrying out vital mandates and that will help a lot.

a clear indication of the determination of the people to call for appropriate social reform, and I have faith that their situation will improve for the better as a result of this voting in ofAdeleke

It is imperative that he seek out capable hands and technocrats who are able to assist in the management and reorganisation of the state. I am happy for him that he was successful in his bid to become the next governor of Osun state.

So, let’s get started with this, shall we? Whatever recommendation the committees make, I really hope the governor-elect won’t try to get out of being responsible for it. After he has taken the oath of office, it is imperative that they immediately get to work in the state of Osun.