Task Force Officer to be Punished for Assault 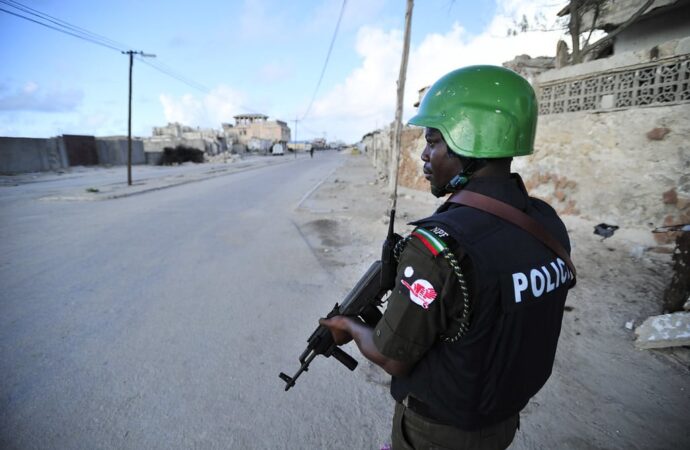 Two years after the nationwide protest against brutality of the police force, the menace continues to eat deep into the social system, with zero improvement enacted to salvage this epidemic. The structure of the police force is so rigid that it has created little or no space for a systemic modification. The police force, created out of the necessity of protecting the lives and properties of citizens have contrarily brutalized and extorted citizens. The police force have consistently abused power, with innocent citizens being collateral damages for their excesses.

A video that has been making rounds shows Pastor Chukwuemeka Ohanaemere, popularly known as Odumeje, the General Overseer of The Mountain of Holy Ghost Intervention and Deliverance Ministry being brutalized by a group of Task Force officials, with reports of his church allegedly to be brought down. This has not gone down well with numerous citizens raising their concerns over the lack of any form of change as to the continuous menace of police brutality, even after the protest.

One thing that caught the attention of many Nigerians upon the video surfacing was the fact that he was being harassed even while complying with their orders. Chukwuma Soludo, Governor of Anambra State has however promised to enforce due punishments on the task force officials involved in the assault of Pastor Odumeje. Numerous reports have expounded in details, how a part of the building owned by the pastor was demolished with the supervision of the Anambra State’s Task Force.

Sources claim that during the exercise of demolishing Odumeje’s property, one of the Task Force officials reportedly started to physically assault the pastor, who complied with the directives of the officials up until then. The virality of the footage has since stirred a public uproar and while this serves up as a reminiscence of 2020 #EndSARS protest, numerous complaints have been put to the government to put in place, measures that will protect the citizens against the menace of police brutality.

Soludo expresses his commitment at ensuring the respect of law and order.

Soludo, swiftly reacting to the viral footage of the assault via a statement made on his official Facebook page on Friday expressed his anger at the delinquency, emphasizing his immense commitment to the respect for the law and order, as well creating a livable and prospering space in Anambra that not only acknowledges the human rights but further respecting these social laws. In this statement, Soludo also appreciates the citizens of Anambra for sticking with and trusting his governance to serve justice.

He further notes this incident will help the government to remain undaunted, as well as checking their excesses against brutalizing innocent citizens. Soludo, via this statement asserts that the occurrence, which evoked immense emotions as a result of its connection to the #EndSARS protest is an illustration of the unprofessionalism and sheer brutal behaviorism with which the Task Force officials carry out their day to day duties, promising to put measures in place to insure that this menace does not reoccur.

Soludo solicits support towards the restoration of dignity of the state.

Moving on, Soludo asserts the need for a continuance towards the mandate of developing the social and economic status quo of Anambra State, promising that his regime will work towards actualizing the best possible outcomes. Condemning the assault suffered by Odumeje and asserting due punishment to the Task Force official, he solicits for the immense support of the Anambra people, in a bid to continually work towards a restoration of the dignity of the state.

Task Force Officer to be Punished for Assault – Gov. Soludo vows to punish officer for assault on popular pastor, Odumeje. – Express your point of view.

That will serve as a lesson to other task force on special duties that when sent on errand you need to discharge your duties diligently,why assault,man handle the man when he did nothing to warrant it,I hope the culprit is punished ooooooo,not audio punishment…Let me.give Governor Soludo a benefit of doubt.

It will serve as lesson for other member of the force, punishment always make people learn there lesson, law and order of the country should straight right why assaulting people, I hope the culprit is punished so justice can reign

This is pure wickedness, even when he complied with them, they were still assaulting him.

In Nigeria, some of those uniform men feel like they are God, and they can do as they wish.

The involved officers should face the law, so this will be a lesson to all other lawless fellows.

Last edited 4 months ago by AN-Abiodun
0

Very good. He was not under arrest, let alone resisting arrest. When they get punished for their unprofessional conduct, the menace will reduce. Sadly they know nothing happens after all, that’s why they’ve all grown wings. Morenof this would put them in check

The police department has a long history of abusing its authority, with innocent civilians being collateral damage due to their abuses. This doesn’t seem right

This is very good because these people deserve to be punished for the brutality they dished out to citizens daily. hopefully, this will make they stop

The Nigerian police force, which was first established due to the requirement of safeguarding citizens’ lives and properties, has, on the other hand, been brutalising citizens and extorting money from them.

It will serve as a lesson to others. Uniform men in Nigeria always fill as if their above the law. They don’t have common espect to anyone, they talk anyhow, they feel that they can do anything and get away with it. Our uniform men are more corrupt

The danger posed by this horrible act committed by the police continues to eat away at the foundation of the social structure, even though little progress has been made to combat this behavioural disease.

Our government must never stop working toward the goal of rehabilitating the standing of our police force.

That’s the major problem with these nonsense security operatives we have in this country. Even when you’re complying with them, they would still do the rubbish they have in their mind. They should be severely published

Because of the force’s extremely inflexible organisational structure, there is very little, if any, room for any kind of systemic change to be implemented.

That should send a strong message to any of the other task forces that are on special assignments, teaching them that when they are sent on errands, they must carry out their jobs conscientiously.

It is necessary to take action against the task force members who assaulted Pastor Odumeje. When carrying out executive orders, you must strictly adhere to the law and refrain from misusing the authority that has been delegated to you.

Even after the demonstration that took place in 2020, there has been no progress made in reducing the ongoing threat posed by police violence; this is a disheartening development.

The government has a responsibility to take preventative steps to ensure that this threat will not be repeated in the future.

Police brutality happens all over the world. We have to handle ours in a better way. These police and other security agencies in Nigeria should undergo reform. They should be reorientated on how to do these essential duties. Maybe that way, we’ll see changes.

A classic example of police brutality in a flash. Police officers are to be re trained, reformed, and re hired back into the force only when they succeed in the training. Nigerian citizens are oppressed daily by this organization who in return should be protecting and preserving the lives and property of the citizens. We should also note that the police organization is underpaid, undertrained, under qualified to do the job. Police in any country will work efficiently if resources and working equipment are readily available to them at their disposal. Citizens of Nigeria must stand together and combat police brutality by making sure their actions are recorded and reported to the appropriate channel.

It is necessary to take action against the task force members who assaulted Pastor Odumeje.They should be severely published as deserved!.This should send a strong message to any of the other task forces.

The Nigerian Police Force needs overhauling. There is less regards for human lives. They’re so concern with what goes into their pockets than protect the human lives. I really appreciate the Governor Charles Soludo who has vow to punish the police responsible for the assault of Pastor Odumeje.

Most of the Nigeria security force need brain evaluation because of their behaviour to the masses.

Kudos to Governor Charles Soludo for vowing to punish the police man that assaulted Pastor Odumeje. The Police system is too corrupt and their brutality on innocent citizens is getting out of hand.

Action must be taken against the task force personnel responsible for the assault on Pastor Odumeje. They should be published harshly as they have earned. Any other task forces should take note of this strongly.

That is the main issue with these absurd security agents that we have in this nation. They would continue to act foolishly even if you were following their orders. They ought to be publicized harshly.