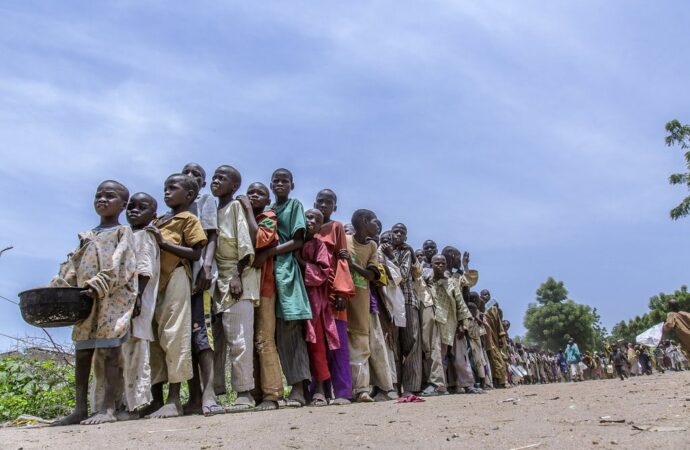 While the education of female children poses to be immensely important in the transformation of communities and reduction of inequalities. The rate of out-of-school girls in Nigeria have reached a climax. Recently, UNICEF complained about the number of out-of-school girls in the country, noting that over 60 percent of the 10 million out-of-school children in Nigeria are girls. UNICEF’s Chief of Field Officer, Dr. Tushar Rane, commenting on the advantages of educating girls, admitted that this situation had been worsened by the recurring attacks on schools which have discouraged parents from sending their children to these insecure learning environments.

However, the United Nations Children’s Fund (UNICEF), in collaboration with the Federal Government of Nigeria and the Ministry of Education have commenced the development of guidelines on policy that will enhance the reintegration of adolescent girls. Omotomi Ayotunde, the Deputy Director of basic education department of the education ministry, during a two-day critique meeting on a draft Re-entry guideline for adolescent girls which took place in Akure, noted that the program would be very important to the education sector and country at large.

Framework to ensure the re-enrollment of girls who drop out for pregnancy.

Ayotunde noted that the meeting was scheduled to discuss a national framework to further ensure that girls who have had to drop out of school for reasons like pregnancy, early marriage, and other numerous issues could be re-enrolled back to school. He asserted that the collaboration between the Federal Ministry of Education and UNICEF was a paramount one for the program to become a national document. He noted that this was a brainchild of UNICEF and the ministry, keying into this idea.

He further indicated the ministry’s interest in harvesting people’s inputs, as well as the stakeholders from the eight states in order to have a comprehensive guideline. He also said that other zones would be contacted immediately and the process of implementing this policy will commence. Also, the resource person at the program Chinedu Osuji noted that the policy’s draft had been produced and is being taken around the country, for stakeholders to assess. He also explained that this initiative was possible due to the collaborated efforts of UNICEF and the Ministry of Education.

Over 60% of out-of-school girls in Nigeria are adolescent girls.

Referencing UNICEF’s statistics, Osuji stated the poignant need to improve the situation of educating girls as statistics show over 60 percent of out-of-school children in Nigeria are adolescent girls. He explained that this initiative’s objective as a national document would be instrumental for working on the alarming rate of out-of-school girls in the country. Further emphasizing on the importance of the initiative, he stated that if a girl has to drop out of school due to cases like pregnancy or marriage, she should be able to re-enter and continue her education.

The permanent secretary of Ogun state’s Ministry of Education, Science and Technology, Olaseni Ogunleye who was also a participant, appreciated the Federal Ministry of Education for the initiative. She also stated that this national document upon completion, will help the girl or child actualize their dreams without hindrances. She however, appealed to the government to ratify this document and make it a national educational policy, so that all states in the country can domesticate it. The director of social, mobilization and special education in Osun state Abidemi Adeoye, recalling the Child Rights Act which stipulated that every child must have access to education stated this scheme was a welcome idea.

Patrick appealed to FG to ensure quick implementation of this initiative.

Abidemi also stated that many girls have become victims of pregnancy due to rape and poverty, and as such, should not have their dreams truncated. Rather, she said it was important for them to be encouraged to pursue their dreams, so that they do not become liabilities and increase the country’s dependency ratio. She further noted that the parents must also be educated as to the importance of training their children, and the government, creating an enabling environment that will immensely help them become resourceful to the society. Patrick Adebayo also welcomed this policy, appealing to the concerned authorities to ensure that the implementation process is not hindered by unnecessary bureaucracy.

It is quite unfortunate we still have a lot of out of school girls in this present clime. Education is the best policy. Every child is entitled to education, either boys or girls. The government should really make good use of this re- entry policy to get girls back to school.

First the government needs to put an end to early marriage, if this can stop a whole lot of girls will continue schooling. This early marriage has been the major reason why girls stop schooling most especially in the northern part of NIgeria

The government should actively work on this policy and see to it that the rate of illiteracy among Nigerian girls reduces drastically .

To those parent that believe marriage is more important to a female child, they need to be enlightened about the advantages attached to being learned

Kudos to UNICEF for this initia to give girl child opportunity despite the situation that warranted them dropping out of school,it will give them chance to be able to achieve their goals and support themselves.

Some parents prefer getting their girl married than getting the to school. And been educated is going to do alot for them not be a illitrate. Let them too achieve and follow the goal to become a big person in future

These northern guys need a mind revamp. The idea of forcefully marrying out young female children is barbaric. The essentiality of education cannot be waved. The FG should ensure quick implementation of this initiative and ensure they get as many girls back to school.

Honestly, these northern folks require a mental makeover. It is barbarous and insane to forcefully marry off young female children because you’re their parent and have control over them. It’s quite unfair. If not poverty and illiteracy, why should anyone do that to his or her child? Education is crucial, and that cannot be disputed. The FG should make sure that this effort is put into action as soon as possible and that as many girls as possible return to school.

Despite the fact that the education of young girls is of critical significance to the development of communities and the elimination of disparities,

This issue had been made worse by the repeated attacks on schools, which have discouraged parents from sending their children to these insecure learning environments. Consequently, the number of students attending schools has decreased.

The programme is excellent, and its implementation would be highly significant for the field of education as well as for the nation as a whole.

The program’s transformation into a national document was made possible in large part by the close working relationship between the Federal Ministry of Education and UNICEF.

If a girl is forced to leave school due to circumstances such as pregnancy or marriage, it would be preferable for her to be able to rejoin the programme and carry on with her education thereafter.

that once it is finished, this national constitution will enable girls and children realise their ambitions without any obstacles standing in their way.

It is imperative that we make a formal request to the relevant authorities in order to ensure that the process of implementation is not hampered by any superfluous bureaucracy.

The FG should make sure that this effort is put into action as soon as possible and that as many girls as possible return to school.

The rate of out-of-school girls in Nigeria have reached a climax. UNICEF is complaining about females out of school abi. If the country is in good shape all this nonsense won’t be happening. We need a better government simple. UNICEF oooo our country is in a mess, u people should stop complaining OK.

The number of the out of school keeps increasing. The government should ensure quick implementation of this initiative.

The federal government is not doing enough to ensure that all this initiative are put to use because lots need to be done and if it’s done properly,it will really change the narrative.

The Re-entry policy for out-of-school girls is really a nice move by FG and UNICEF who are actually working on the guideline policies to make it effective. Howbeit government implementing this very fast requires complete defeating of terrorism in most regions especially the northern part of the country.

This present administration is the major reasons why we have high number of out of school girls because they have failed to do the needful.