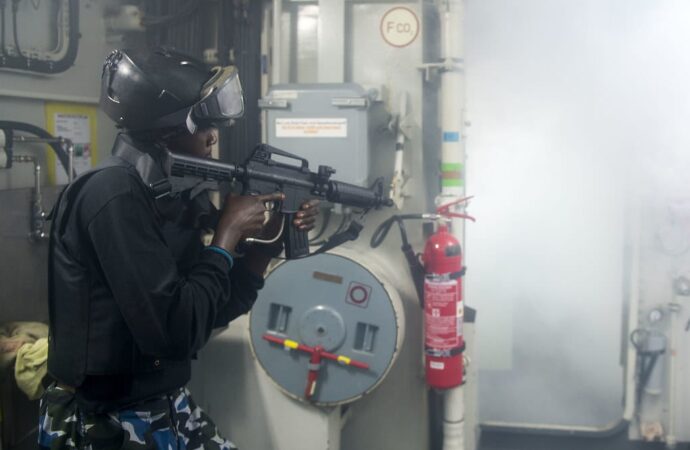 The Commandant of the Nigeria Security and Civil Defense Corps (NSCDC), Dr. Ahmed Audi has urged the private security guard companies in the country to ensure that they play their roles towards contributing to the general national security status in the country. During the presentation of operating license to 16 new private security guard companies which held in Abuja, he called on these companies to ensuring facilities in place and swiftly reporting suspicious activities to the corps.

Dr. Ahmed Audi noted to these private operators that private guards possess a very important role in the corporate existence of the country in the aspect of national security architecture and thus, their operation, more of a call to national duty which must be duly honored by operating within the construction of Nigeria’s designated laws. Private security guards have a germane responsibility that works well within the infrastructural confines of the country’s security system because of their access to a wider locative range and as such, must also overtly ensure the safekeeping of the general public.

Talking about the thorough processes that these private companies had to go through in acquiring their licenses, he stated his certainty that the personal experiences of these private security companies will surely help them appreciate the intense focus of the corps to details. He asserted that while they have no intention in making the process cumbersome, they are also saddled with the responsibility of issuing licenses to individuals with impeccable characters and high moral standards that would by extension, be ambassadors for the corps. He further issued a stern warning that any company with detected deviation from the moral standards that have formed the grand basis for license acquisition will be immediately axed.

On the poignant responsibilities of private guards companies in ensuring maximum security provisions, Security Expert and Vice Chancellor of the Federal University, Lokoja, Professor Olayemi Akinwunmi pointed out the pivotal need for an effective service quality control regulation, stressing that there are intricate parts of numbers and strengths that must be utilized effectively to avoid bastardization of the objectives. He also noted that the private security guard companies, if not duly regulated, can provide a front for numerous criminal groups and thus, there must be a clear outfit distinction between the private security guard and government‘s.

Firearm license for private guards to be for fixed periods to avoid abuse.

Continuing on government legislations, the VC also asserted the serious need for discussing the issuing of firearms for private guards, noting that firearm licenses should be for fixed periods so as to avoid cases of abuse, as well as the enforcement of other industry’s self-regulation guides that will encourage monitoring against the proliferation of these budding private security guards companies. He also explained that the private security industry was made up of a wide range of security service providers that provide security services to people and properties under contract and is profit oriented.

Also, he noted that the security sector reform was largely interested in the development of an institution that would efficiently make security provision for every citizens in line with the human rights and rule of law. Wilson Esangbedo, National President of the Association of Licensed Private Security Guards in Nigeria, appreciating the NSCDC for its role in the regulatory process and partnership with the private security companies, encouraged the new members to strictly adhere to the set regulations provided by the NSCDC.

The NSCDC idea is a welcome development though because the private companies can also train their personnel’s in order to perform optimally to add to security input in Nigeria.

If this will work in favour of our security consciousness then private guards or security personnel should be given the license to operate. I only hope they will prevent crimes and not become the wheel of violence themselves.

This is nice. If the private security can assist to ensure good security in this country by support and work together. This is a welcome development

Including private security will help strengthen our security sector more as the will be available around our community well and safeguard neighborhood.

These businesses need to work together to ensure that the necessary facilities are set up and that they promptly report any suspicious activities to the appropriate authorities.

Concerning the Nigeria security problem,all hands must be on deck to ensure that proper security architecture is put in place either by the private security personnel or government security agencies.

This is just a request from incompetent military personnel, so with the large number of personnel we have, they are still not capable of protecting us??

If this will reduce the rate of criminal activities in Nigeria, the private guards should not hesitate to help, we should all work together to reduce the crime rate

NSCDC is proven to be efficient in their operations in curbing crime. They are doing their best.

Due to the fact that they have access to a greater locative range, private security guards have a pertinent obligation that functions effectively within the architectural constraints of the country’s security system.

The NSCDC to be honest with you are actually doing their best in curbing crimes in the country. They have being help in national security.

Any business that is found to have deviated from the ethical norms that have served as the primary foundation for licence acquisition ought to be put on notice by the government that they will be terminated promptly should this be discovered.

the distribution of firearms to private security guards, with the caveat that firearm permits have to be granted for set amounts of time in order to prevent instances of misuse; also, the enforcement of other industries’ self-regulation guides.

The private security industry is comprised of a diverse group of security service providers. These providers offer protection services to individuals and businesses on a contractual basis, and their primary motivation is financial gain.

It is believed that there are at least 2 million people working as private security guards in Nigeria, which is a number that is greater than the number of people employed by government-funded security staff.

New members were urged to adhere closely to regulations issued by the NSCDC, and we should be grateful to the NSCDC for its involvement in the regulatory process and engagement with the private security businesses.