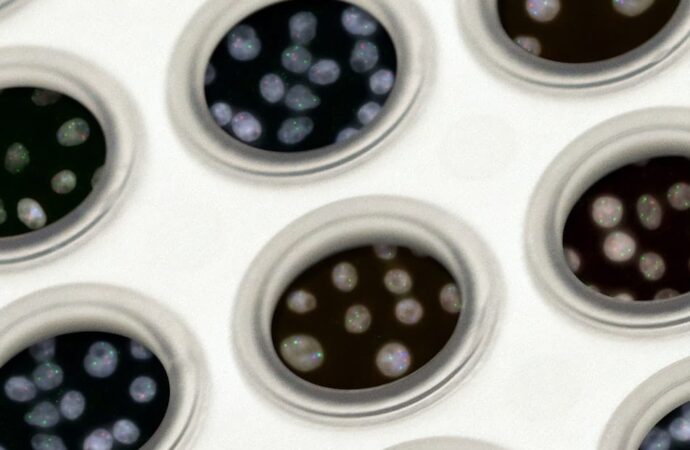 Beyond the issues surrounding women’s menstrual cycle, such as cramps, mood swings, and hormonal imbalances, an ovarian condition which causes infertility and may make women’s conceiving difficult is going undetected in Nigeria. The condition, known as polycystic ovary syndrome, is the most common gynecological endocrine disorder in women that have attained reproductive age. The condition is when small, benign and painless cysts are present in the ovaries. This results in a range of symptoms and fluctuations in hormonal levels.

A cyst is an abnormal, usually non-cancerous growth filled with liquid or a semi-solid substance which can sometimes cause pain. In this syndrome, the cysts are painless, but it causes other things in a woman’s body. It increases androgen levels. Androgens are a group of sex hormones, which help start puberty and play a role in reproductive health and the development of the body. Testosterone is the most common androgen in both males and females. By default, males produce more testosterone, which help in producing deepened voice, hair growth (on the face, beards, etc.), male reproductive organs development, and sperm development.

The syndrome is a big problem for women in Nigeria.

Because this syndrome causes increase in testosterone (an androgen) in women, it leads to excessive body and facial hair and menstrual irregularities (no period or a long period). This condition is called a syndrome because it is a set of signs and symptoms which occur consistently together. It can mildly or even severely disturb the reproductive, endocrine and metabolic functioning of a woman. The syndrome is a big problem for women of reproductive age in Nigeria.

Public health lecturer, Ajike Saratu Omagbemi, said that the syndrome affects one in six infertile women in Nigeria. She also said that local studies have reported its rates as being between 13.8 percent and 18.1 percent among the study population of women who were in their reproductive age. Omagbemi said that the studies are mostly focused on determining the prevalence, treatment and management techniques of the syndrome. As such, less studies have focused on how much people know about the condition.

The syndrome affects the health and well-being of girls and women.

Polycystic ovary syndrome can affect the health and well-being of girls and women in the country, in the short and long run. It can also lead to deterioration of their quality of life. The disease can begin as early as when a girl attains puberty. The girl may not understand what is going on in her body and its risk. Older women with the syndrome may not seek or receive specialized care early enough. They may also have years of unrecognized ill-health before getting a diagnosis.

The symptoms are often related to a reduction in a woman’s self-esteem and may also affect her psychosocial health. Of course, infertility is one of the prime symptoms of the syndrome. It is also one of the reasons that the syndrome is diagnosed mostly later in women. Infertility is a major concern in African societies, including Nigeria. There is severe stigma associated with infertile women in Nigeria. Some psychosocial and other consequences of this may include neglect, violence, deprivation, marital problems and mental health issues.

The syndrome is difficult to recognize for a variety of reasons.

Omagbemi said that the syndrome is mostly diagnosed two or three years after the start of puberty because that is when the menstrual patterning and cycle becomes stable. At the outset of an adolescent’s menstrual cycle there are different manifestations. Some experience menstrual irregularity more frequently. It in turn leads to unwanted developments such as male-patterned hair growth, male-pattern baldness, and acne. Experts also believe that heightened androgen levels result in the development of the syndrome in adulthood. The syndrome is also strongly associated with menstrual irregularities, although it is not the only cause. The syndrome is easy to miss in adolescents and in the transition between adolescence and adulthood normal changes can mimic symptoms of the syndrome.

I hope this ovarian syndrome is checked properly in women very early. This is just to ensure a woman can still be able to put to bed. It is also important women check themselves regularly to see if they are really okay and fine to ovulate.

This is really educative. It’s indeed a serious challenge; the fact that it comes with numerous problems is a major concern. Even psychosocial and other consequences including neglect, violence, deprivation, marital problems and mental health issues.

It is a significant obstacle, and the fact that it is accompanied by a host of issues including infertility is cause for great concern. Even psychosocial effects including abuse, violence, deprivation, marital challenges, and mental health problems.

Regular check up is very important for every woman to avoid some complications during or after child birth.

This must be one of the major reason why some women find it difficult to conceive, women should be enlighten on symptoms of diseases like this, so they can take extra care when they notice it

The short- and long-term health and wellbeing of girls and women in the nation may be impacted by polycystic ovarian syndrome. Additionally, it may result in a decline in their quality of life.

This condition need to be look into very well in term of awareness and treatment because it look like new health condition in Nigeria.Because if it is detected early,there will be chance of survival.

This ovarian disorder, which leads to infertility and may make it more difficult for women to conceive a child, is not being diagnosed in Nigeria.

We all need to go for regular medical check up to discover how our body is reacting as this will let us know if we have any undetected ailment in our body before it escalated to something serious.

Males create more testosterone, which helps develop a deeper voice and contributes to the growth of hair unlike ladies

It’s possible that older women who have the syndrome won’t seek or get specialist care until it’s too late. It’s also possible that they went through years of their condition going undiagnosed until they finally got it figured out.

A woman’s reproductive system, endocrine system, and metabolic function may all be moderately to significantly disrupted as a result of this.

The syndrome is characterised by the presence of noncancerous, innocuous, and asymptomatic cysts in the ovaries. This causes a wide variety of symptoms as well as swings in the levels of certain hormones.

There may be a variety of signs and symptoms that an adolescent is experiencing when her menstrual cycle first starts. Some experience menstruation irregularity more frequently

The majority of cases of the syndrome are identified between the ages of two and three years after the beginning of puberty because this is the time when the menstrual patterns and cycle become fixed.

It is also important women check themselves regularly to see if they are really okay and fine to ovulate.

More Awareness about polycystic ovary syndrome needs to be created among women for them to be able to manage or correct it.

I will advice women with Polycystic Ovarian Syndrome to seek for medications especially as it concerns fertility. Women should also be sensitized about it.