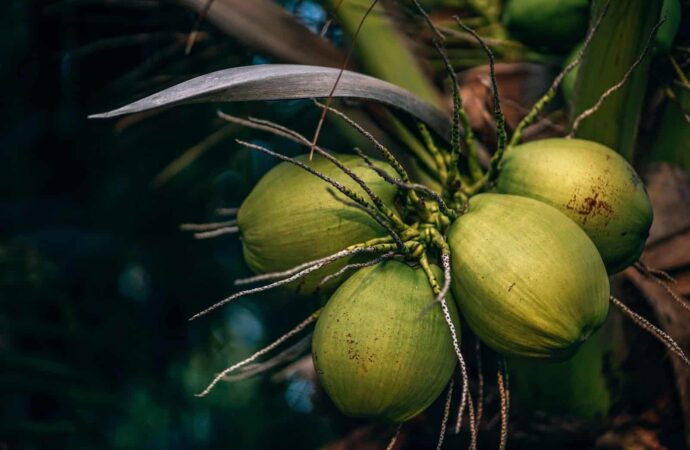 The National Coconut Producers, Processors and Marketers Association of Nigeria (NACOPPMAN) has announced that every state has the ability to generate N60 billion annually from coconut production. Coconut production is important for Nigeria, and the NACOPPMAN’s announcement is a welcome one. This new revenue stream could have a significant impact on the country’s economy, and provide new opportunities for employment and economic growth.

Coconut is a tropical fruit that is grown in many parts of the world. The coconut tree is a member of the palm family, and the fruit is the large, hard-shelled seed of the tree. The flesh of the coconut is white and juicy, and the water inside the coconut is clear and refreshing. It is a very versatile fruit, and can be used in many different dishes. It can be eaten fresh, or used in desserts, curries, and other savory dishes. Coconut is a good source of fiber, and is also high in vitamins and minerals.

Is a popular food and ingredient in many cultures.

There is some debate over the exact origins of the coconut tree, but it is generally thought to have originated in the southeastern Asia region. These tall trees (up to 30 m in height) can live for quite a long time (up to 100 years), and are now found in many tropical and subtropical regions around the world, including parts of Africa, the Americas, and the Caribbean.

Recently, the Coconut Planting Season flag-off exercise in Badagry, Lagos was held to encourage the planting of coconut trees in the area. This event happens once per year. This year, the event was held on the 1st of February and was officiated by the Lagos State Governor, Mr. Sanwo-Olu. In his speech, the governor emphasized the importance of planting coconut trees, as they provide a number of benefits to the environment and the people. He also urged the people to take advantage of the flag-off exercise to plant as many trees as possible. This exercise is an important event in the Badagry community, as it helps to ensure the continuous planting of coconut trees.

Significant potential for the sector to grow in the future.

The subsector is one of the most untapped sectors in Nigeria. It is estimated that only 20% of the sector is currently being utilized, leaving a huge potential for growth. The sector is largely untapped due to a lack of infrastructure and investment. However, there is significant potential for the sector to grow in the future. With the right investment and infrastructure in place, the coconut subsector could become a major contributor to the Nigerian economy.

It is estimated that there are at least 10,000 hectares of land planted with coconut trees in Nigeria. This number is likely to be even higher, as it does not include all of the smallholder farmers who also grow coconuts. If we conservatively estimate that each hectare produces an average of 6,000 coconuts per year, then we can estimate that Nigeria produces at least 60 million coconuts per year. At current market prices, this amounts to nearly N60 billion (US$200 million) in revenue per year from coconut production. This is a significant sum of money, and it is likely that this figure is even higher, as it does not include the value of coconuts sold informally.

There is a need to encourage investment in coconut tree planting.

Coconut trees also play an important role in the environment, and their contribution to the economy is significant. However, the number of coconut trees in Nigeria is declining. This is due to a number of factors, including the loss of habitat due to development, the effects of climate change, and the lack of investment in coconut tree planting and care. As a result, the future of the coconut industry in Nigeria is at risk. There is a need to encourage investment in planting and care, so that the industry can be sustained. This is especially important for young people.

Coconut planting should be encourage across all states then…..it plays important role in the environment, and it contribution to the economy is significant….
Nothing should hinder it!

Coconut trees also play important role in economy of the country, some people use to cut it down because they don’t know it value there many things we can get from this coconut so we need to encourage the plantation and care of coconut trees

The petroleum sector we so much concentrated on has fallen now government should be trying out other sector that has the probability of improving the economy more like the coconut subsector, I think there is a need to encourage investment in planting and care for coconut trees so that the industry can be sustained.

With just 20% of the sector currently being utilized it yields are high and profitable, Now imagine it being fully invested on and provided with the required infrastructure, its obvious a huge potential for growth are been left out.
Investment on coconut tree planting and care should be taken very serious since it prove its usefulness well. Government should also look into and invest on other sectors, subsector and industry that has potential of helping us develop the economy

If in each state of the federation we can have at least 10,000 hectares of land for the production of coconut and each family is planting three coconut in their environment, this can turn around the economy of the country.

This might just be another lucrative means of generating income for our economy so the government should go ahead with it.

Our useless government needs to focus more on this coconut industry because it will boost our economy .

Coconut business is not growing in Nigeria right now Because there is insufficient infrastructure and financial backing, when this changes we will experience growth

Despite the Coconut sector being at its lowest , there remains a sizeable window of opportunity for the industry to expand in the years to come with proper dedication and investment

With the way our Government works this 60billion naira would be embezzled and probably 10billion would be allocated to the coconut industry. Bunch of thieves

The government of Lagos State can really tap into this area especially in badagry that a lot of coconut trees are seen everywhere,even in tourist attraction people that come to beach can be served coconut drinks in special way and money being derive from it

Coconut trees will not only generate massive income for our country it will also beautify and bring life to our environment, so I’m entirely in support of this

In addition to being abundant in a wide range of vitamins and minerals, coconut is also a superb source of dietary fibre known as mucilage.

Where we’re supposed to plant to generate money, people have built houses on them; the government should probably destroy some uncompleted buildings so the land can be used for something meaningful

No doubt, agriculture is very lucrative and profitable. There are a lot of others sectors that could be diversified into, buh they chose one. Why choose just one when you can have almost all and boost the economy tremendously.

60billion is indeed a urge money that can be generated through coconut cultivation. We have been hearing about some agricultural programs being sponsored by the government, some loans received by the government but recently, most Farmers especially in the southern has been lamenting about increase in fertilizer price and their inability to purchase it and as such reduces farm yield.

Once we are able to invest in coconut production, it will also enhance agricultural production. We will have more cash crop that we can export and generate revenue from it.

If our Government can be serious and sincere with the right investment and infrastructure in place, the coconut subsector could become one of the major contributor to the Nigerian economy.

Lots of potential are in cultivation of coconut, it’s serve as food, medicinal and big income to the person cultivating and also serve as source of employment.

We still have a lot of coconut farms in Nigeria, but most people don’t know it is worth a fortune.

NACOPPMAN should enlighten farmers on its monetization process as this will help them massively.

If government can invest in coconut plantation and production then it will be possible to realize that figure.
We are in a country that Farmers are now afraid to go to farm. Insecurity everywhere and our government is shielding the perpetuators.
They only promise to release loan to Farmers and refusing to curb herders destructive activities.
Truly, the lands to cultivate coconut but the situation at hand need a competent leader to actualize this vision.