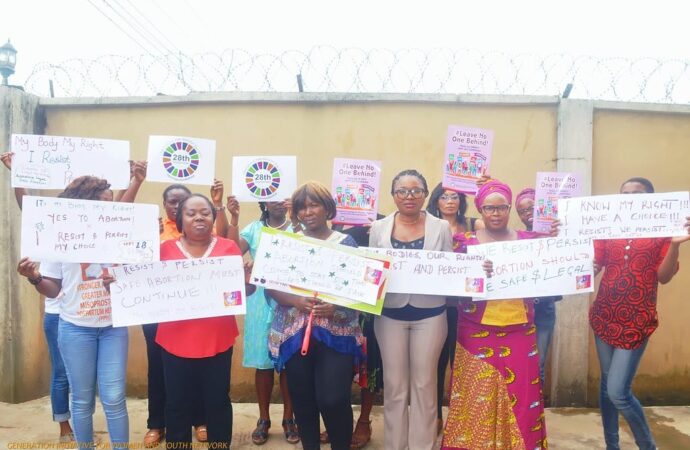 Lagos governor directs suspension of the state’s guidelines on abortion.

The Governor of Lagos State, Babajide Sanwo-Olu has directed the suspension of the guidelines that the state released earlier on safe termination of pregnancy. The Commissioner for Health, Prof. Akin Abayomi disclosed this in a statement released in Lagos on Thursday, 7 July 2022. The commissioner noted that the set of guidelines had generated massive public outcry, and this necessitated its escalation to the governor. The commissioned also said that the governor had advised that key stakeholders and the public be sensitized to ensure a clearer understanding of the objectives of the guidelines.

“To this end, we are suspending the implementation of these guidelines in the meantime for the Executive Council to deliberate on this matter and ensure adequate public sensitization and stakeholders’ engagement to reach a consensus required for a successful guideline development,” the commissioner said. In his words, the ministry is seeking different methods of eliminating illegal abortions and ensure maternal mortality is reduced to the bare minimum. That is, to ensure that the mother does not die at birth and the family unit disrupted.

The guideline was to reduce maternal mortality according to the law.

Earlier on 28 June 2022, the Lagos State Government had developed and launched guidelines for the development of safe and lawful abortion services within the ambit of the state’s criminal law. The 40-page policy document titled “Lagos State Guidelines on Safe Termination of Pregnancy for Legal Indications,” was presented by the Permanent Secretary of the Lagos State Ministry of Health, Dr. Olusegun Ogboye. The secretary said that the need to have those guidelines was borne out of the desire for evidence-based data and information for health workers in the public and private sectors.

He explained that while therapeutic termination of pregnancy is permissible under the law in Lagos State, the absence of clear post-procedure guidelines has hindered its effective implementation and resulted in preventable deaths. He said, “In 2011, the Lagos State House of Assembly updated the criminal code, providing for abortion to save the life and protect the physical health of the woman. While physical health is covered under the Lagos legal framework, services conforming to the law have not been available in the procedure of the state’s health sector. This document provides information on relevant laws applicable in Lagos State while providing standard and best practices with regards to legal indications, pre and post-procedure care, methods, and the monitoring.”

The 40-page document, an adaptation of the national guidelines.

Recently, the United States Supreme Court overturned Roe v. Wade, criminalizing abortion after six weeks and relinquishing the decision to choose to legalize abortion to individual states. Roe v. Wade, 410 U.S. 113 (1973) was a landmark decision of the US Supreme Court in which the court ruled that the Constitution of the United States generally protects the liberty to choose to have an abortion. The recent decision has generated public outrage and even several public protests. It is in this fashion that the 40-page policy document sought to adapt the national guidelines.

“To guide the implementation [of the guidelines], one of the follow-up outcomes recommendations of the project was the adaptation of the National Standards and Guidelines for Safe Termination of Pregnancy within Legal Indications within the Lagos State context. The Federal Ministry of Health had developed and disseminated the national guidelines on safe termination of pregnancy. Which highlights the compendium of conditions and circumstances under which termination of pregnancy could be instituted. The guideline was intended to build the capacity of health professionals to identify pregnancies for which legal termination could be instituted,” the commissioner said.

Abayomi said that illegal abortions and high risk pregnancies leading to unresolvable complications rank high among the several factors that contribute to maternal mortality. “In this regard, it became imperative to examine, in keeping with existing national and state laws and policies, if there are indeed justifications and medical reasons to offer abortion to a woman whose life is threatened by a pregnancy,” he said. He also noted that following this, the guideline was developed over four years through painstaking work by experts in Law and in Obstetrics and Gynecology.

If the aim is to curb abortion it’s a welcome development which well meaning citizens will support because of it important.

I strongly believe that the society is divided on this issue. My opinion is that women should have the freedom and liberty of making the decision about abortion. The govt should have a safe way for the procedure and also provide counseling for the women.

Despite the fact that the law in Lagos State allows for therapeutic abortions to be performed, the lack of clear post-procedure protocols has hampered the procedure’s ability to be effectively implemented, which has led to fatalities that may have been avoided.

Illegal abortions and high-risk pregnancies that result in difficulties that cannot be resolved rank high on the list of things that should be abolished in Lagos.

Sensitisation of critical stakeholders and the general public is required to ensure a better knowledge of the goals of the guidelines. This is necessary for these groups to comprehend the significance of the abortion law approved in Lagos.

People must stop engaging in the practice of abortion to preserve the life of the unborn child and the woman’s physical wellbeing. This is a good idea from the Lagos state government

First of, I thought abortion was illegal. However, of all ways to prevent this thing, it doesn’t have to get to abortion. People just need to be enlightened. Cos, there are quite a number of ways.

The guideline will really help protect people from prevented death and illegal aabortion.

This is a good idea. Abortion can be vastly reduced if the government sets up family planning programmes. This should help.

Abortion to me is a bad thing you know if you not ready to have a kid then you should have unprotected sex. Now ladies take abortion like spa they just don’t think all they do is have sex and when they are pregnant they just think of abortion

Lady’s nowadays have taken abortion as a normal way of getting rid of unwanted pregnancy, even without counting the cost of the action on their life.

Abortion can be vastly reduced if the government sets up family planning programmes for the citizens. Then they will be able to check themselves.

This is Definitely a brilliant idea . Morally, abortion is not even the best option for unwanted pregnancy. Either ways suspending this guideline should be for ladies that are carrying unwanted pregnancy and not those that are being advised medically to abort.

Illegal abortions and high-risk pregnancies that result in problems that cannot be treated are two of the primary causes of maternal death. There are a number of other reasons as well.

It is very good as The Ministry of Health is investigating a variety of potential solutions to end the practice of unlawful abortion and bring the rate of maternal death down to an acceptable level.

Suspending the guideline is definitely the safest thing to do. This will help protect both ladies and innocent unborn kids

This is a brilliant step taken by Sanwo Olu because a kit of women has lost their lives due to abortion, and it’s bad

Abortion is very risky, they way ladies do abortion is surprising. When they know that they are not ready why not use condom instead of having sex flesh to flesh. Many ladies don’t go to hospital for abortion, they take things to terminate it. I also think that females need more education on the risk on abortion not only suspension because they will always have their ways

Abortion is a risk in terminating pregnancy life is at risk. Illegal abortion should be stop

Prior to the implementation of such guidelines, the government should make sure that the public has been adequately educated and that all relevant parties have been involved in order to obtain the necessary consensus for the development of guidelines and prevent their abuse.

This Abortion guidelines will be very controversial in nature. While some individuals are pro choice, who believe in abortion, some are pro life who, who forbid abortion. I want to see how the government will come into a common resolved ground to deal with this Abortion right.

From.my perspective abortion is a no no for me except in cases where the woman has miscarriage and evacuation is needed to be done to flush out everything or whereby there is a health risk to the pregnancy but the other way round where young ladies get pregnant and you are saying there are guidelines to be put on ground for such to have a choice of aborting the foetus is a no for me,please Lagos state should please stop this law…..

Abortion are done to either terminate unwanted pregnancy or safe the life a pregnant woman who is at the point of death. Governor Sanwo-Olu must have suspended this guidelines due to the former above. Young girls who engage in an illicit sex which lead to pregnancy would want to terminate such pregnancy. They can visit any hospital under the set guidelines and terminate the pregnancy. If cautious are not taken as regards to this, we may have so many unwanted pregnancy been terminated by some quack and greedy doctors that may lead to dead of so many of our young girls.

Governor Sanwo of Lagos State must have suspended the state’s guidelines on abortion base on some reasons best known to him. The guidelines could be hijacked by unscrupulous element to perpetuate illegal abortion which will invariably lead to maternal mortality.
An as such necessary procedure should be put in place to guide against such.