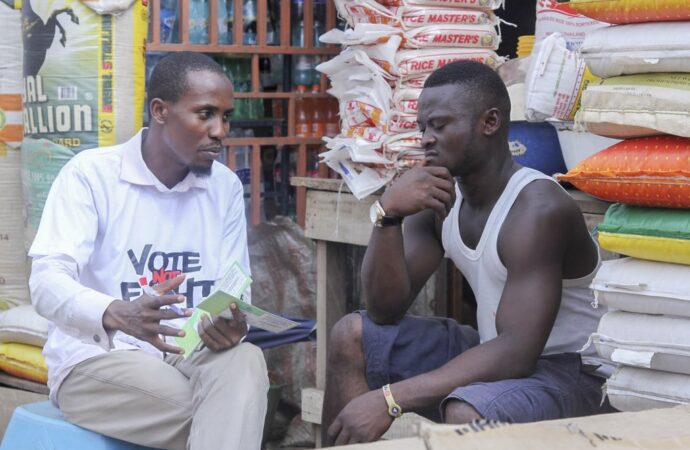 Photo by US Department of State- Ask Nigeria

How to prevent violence during every election season in Nigeria.

As the 2023 general elections approaches, the Independent National Electoral Commission (INEC) has started raising the alarm about electoral violence in the country. Every election season, Nigerians witness politically motivated violence at polling units and even elsewhere. Some of the reasons for this violence include: minimizing or neutralizing opponents, denying opponents the ability to mobilize their agents and supporters in order to perform at the poll, and to manipulate or delegitimize the process of election. The perpetrators of these acts achieve them through assassination, bombings, kidnapping, assault, or even armed attack. While the reasons for this may differ, the goal remains constant: to work in favor of the instigator, directly or indirectly.

In April 2022, INEC has announced that 1,149 Nigerians have been killed as a result of electoral violence, while the commission has suffered 42 attacks on its offices and staff. On April 16, 2022, an INEC worker, Mr Anthony Nwokorie, was killed by gunmen when he was conducting the continuous voter registration in Ihitte Uboma Local Government Area in Imo State, Nigeria. Trends of violence especially during the 2019 elections have shown that the inter-election period between federal and state polls is often violent. The 9 most violent states during election in Nigeria are Lagos, Ogun, Kano, Akwa Ibom, Delta, Benue, Bayelsa, Kogi, and Rivers, while the South-South geopolitical zone was the deadliest in 2019.

What are the causes of electoral violence in Nigeria?

The main cause of electoral violence in Nigeria is the high stakes of politics in the country. Political positions hold the key to accessing the nation’s wealth and sometimes political power. So, the competition is stiff and contenders are willing to do anything to clinch public office. In this political “game,” only the fittest survive; winners get everything while losers get nothing. Consequently, political aspirants employ different strategies which may include violence. Another reason is that state institutions are weak. In Nigeria, what it takes to control government ministries, departments and agencies (MDAs) is to coerce or manipulate the head. In other words, these institutions are only as strong as their heads, who are vulnerable to blackmail, kidnapping, and coercion.

This means that the systems in these institutions are almost non-existent. There have been cases where electoral officials have doctored election results and favored a party. In some cases, the victim seeks redress through armed non-state groups because security agencies have either been compromised or are powerless. Yet another reason are triggers such as hate speeches, fake news, insensitive speeches, cyber and media bullying, etc. This can push people to take the law into their own hands. Finally, Nigerians are frustrated by the state of the nation. There is poverty, inequality, illiteracy, insecurity, unemployment, corruption, inflation, and hunger in the land. Added to these is the lack of responses or insensitive and inadequate responses from the government.

All participants in the electoral process must cooperate.

Prominent figures, government agencies, NGOs, the media, and international actors in the electoral process in Nigeria must work together to promote healthy dialogue and public education among stakeholders and the masses. This will reduce the tension in notable hotspot areas for violence. Of all who are involved in the process, the Federal Government of Nigeria is perhaps one with the most difficult task. It must investigate the origin of these incidences of violence, some of which have been mentioned, and respond accordingly. In some cases, it will require strong tactical force to nip the problem in the bud. For others, it will require the wisdom of wise leaders in utilizing diplomacy and dialogue.

More effort should be put into strengthening institutions involved in the process, specifically INEC and security agencies. The electoral commission should not be politicized; so, its management should be non-partisan. Security personnel should be taught to respect human rights and treat even the suspects with dignity. Elections should also be demilitarized because elections are not state of emergency. Prominent political party heads should also play a role in cautioning, checking, condemning and sanctioning violent members. Civil society groups should demand greater accountability from all stakeholders involved as well as sensitizing the public. The media should provide genuine and balanced news to Nigerians. The Federal government should also seek help from developed countries in terms of intelligence, equipment and personnel.

Cases of violence perpetrated for the 2023 general elections.

There has been reports that traders at the popular Alaba International Market, Ojo, Lagos were attacked on Thursday, June 9, 2022 as they rally one another to register for the Permanent Voters Card (PVC). These traders shut down their businesses on Thursday, June 9, to register and collect their PVC ahead of the 2023 general elections. There was massive attendance at the registration units, mostly traders of Igbo extraction. While the exercise was ongoing, thugs armed with machetes, clubs, sticks and other weapons made to disrupt the registration process, but they were overpowered by the traders.

Electoral violence prevention in Nigeria – How to prevent violence during every election season in Nigeria. – Express your point of view.

Electoral violence prevention in Nigeria – How to prevent violence during every election season in Nigeria. – Express your point of view.

Violence during elections is something that has been constant in this country, it has resulted in so many loss of lives and property so the government has to ensure there’s a free and fair violence free election this time around

All these violence that happens during elections is a form of intimidation but this time around we won’t be scared. Everyone has a right to vote

Our politicians are evil people they all deserve jail because they don’t value human lives. They can do anything to win their post in government

How can all these traders close their market for a day and decide to bombard a local government to get their PVC?? There’ll surely be problems na

Last edited 5 months ago by Kazeem1
7

In Nigeria everyone is greedy because just small bribery here and there and the inec people can manipulate results. LoL there’s no need for violence

It’s God that can keep us safe in this country because these our politicians are dangerous people and politics is a dirty game. I hope God touches their heart so they don’t render much violence this time around

The thugs being deployed by politicians to perpetrate this evil should use their brains that why can’t politicians call them when their children wants to Wed or during birthdays but it’s only to do something that can leas to the loss of their lives they are being called for.

We shall not be bullied and Intimidated, we’re going to come out in large numbers to vote for someone like Peter Obi that is after the betterment of our people. GET YOUR PVC NOWWW

In terms of experience, technology, and manpower, the federal government should seek assistance from developed countries, so these elections would be conducted efficiently

To prevent more violence from happening in the upcoming elections Civil society organisations should require increased responsibility from all parties involved, as well as educate the people.

Is only God that can safe us in this country because these politicians are dangerous and greedy I hope God will touch their heart
Violence is what they know.

Political violence and Nigeria politics works hand in hand because our political elites are the one sending out the perpetrators arming them with weapons to use in disrupting the elections,and these thugs are ready to do anyt behing for these so called god father’s because of money they receive from them,so parents have a lot to do by sensitizing their wards

Security should be tight on the election day in other to protect the people, because this thug will do anything for money. Violence is not the right thing may God protect and save us

There is poverty, inequality, illiteracy, insecurity, unemployment, corruption, inflation, and hunger in the land. All we are getting is lack of insensitive and inadequate responses from the government…..Despite how things are happening at the moment in the country (these things should have enlightened citizens enough to know who to vote for) and say no to bribery and corruption but yet some would still accept bribe to rig election, vote wrongly and cause violence. I pray for God’s intervention in 2023 election. Amen

Is these politicians that are greedy, killings Nigerians because they want power

We need to prevent electoral violence in the forthcoming election next year. We won’t allow power mongers to cause commotion that will discourage a free and fair election.

The government should strengthen INEC and security agencies more to make everywhere secure for the voters at there various polling unit. It is something that we experienced in the last general election that even result to death for some people the government should try as much as possible to mitigate the violence in all
possible way

Politicians are the major cause of election violence in Nigeria because 95% of politicians don’t have any work apart from politics so they normally see election as opportunity for them to stay relevant and to continue improverish the masses so that they can have full control of their mind and emotion.

This violence is one of the reasons that discourages numerous Nigerians from exercising their franchise. The fact that most people already have the impression that their vote don’t count, then coupled with the insecurities and tragedy that comes with voting can honestly be a total turn off. Like after all it’s who they want that’d eventually get in.
INEC should do better in ensuring not just a free and fair election, buh also a safe one.

Compared to 2019 election we need to ensure we have an itch free and peaceful election. More security agents should be put in every polling units to protect the voters from bad gangs and street boys aiming to disrupt the election process.

We need enough security men, both soldier, Civil defence and police should be available that day to prevent violence. Each poll unite should have at list 10 or more security men with guns.

One of the ways to prevent violence is to avoid it in the first place, as only a few people can stand the heat of it.

And innocent people are the victim of political violence.

INEC should brazen up its law to prevent further harm, and also love for humanity should prevail over every other thing.