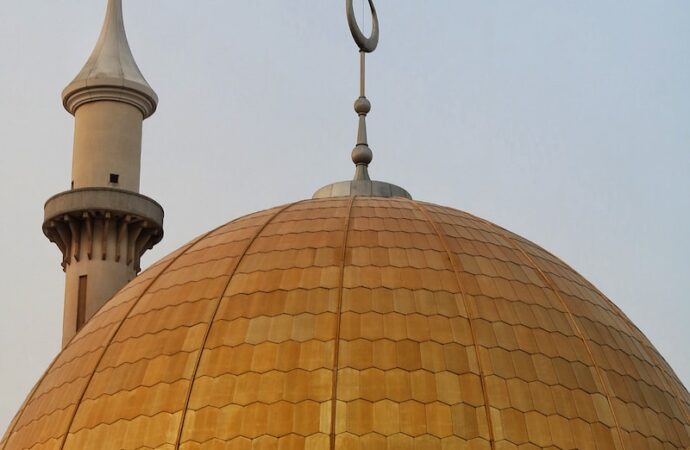 One month before the commencement of the much anticipated 2023 presidential and National Assembly election, the Independent National Electoral Commission (INEC) has warned against political parties and candidates using public facilities and religious centers for their political campaigns. The Presidential and National Assembly campaign with are scheduled to commence from the 28th of September, and on the 25th February, 2023, the commission has admonished political parties to strictly adhere with the provisions provided in the Electoral Act, so as to avoid being sanctioned.

Mr. Festus Okoye, INEC’s National Commissioner and Committee Chairman on Information and Voters Education explained that in accordance with the Section 92 of the Electoral Act, 2022, political campaigns are expected to be civil, with no form of abuse. Previous electioneering campaigns have witnessed political parties enacting different theatrics, as well as campaigns in public offices and religious gatherings. Okoye however noted that Section 92 of the Electoral Act prohibits political campaigns and slogans tainted with abusive notions, whether it be directly or indirectly aimed at injuring religious, ethnic or sectional feelings. Thus, abusive innuendoes, intemperate or slanderous languages that are likely to provoke violent reactions will not be tolerated.

Sanctions in place for parties & aspirants that violate Electoral Acts.

He further cautioned political parties against hiring political thugs. Referencing the subsection 5 of the Section 92, he warned against parties and candidates training individuals and groups to indulge in physical coercion that would arouse apprehension during the campaign, adding that political candidates must also not keep or make use of armed private security organizations of any sort for provision of security. They will be unable to aid political candidates during campaigns, rallies or elections, as referenced in the Section 6 of the Act.

Okoye, speaking on the need for political parties and candidates to adhere to these Electoral Acts, noted that there were sanctions in place for violators. A political aspirant that contravenes any of the provided laws of the Section 92 of the criminal law is liable to pay the maximum fine of N1 million or imprisonment that will last the term of 12 months. In the case of a political parties, the fine of N2 million is attracted on first offense and N1 million on subsequent offense. Speaking of those that force others to support their candidates during campaigns, Okoye stated that the Section 93 of the Electoral Act prohibits coercion of support for a candidate or party, and any aspirant, individual or group guilty of this offense is liable for the maximum fine of N1 million or imprisonment within a period of 12 months.

Numerous Nigerians urge parties to base their campaigns off issues.

Meanwhile, the electoral body has commended processes for the procurement of sensitive materials to be used for the elections. Okoye noted that INEC’s zonal stores have started receiving non-sensitive materials that is required for the conduction of the impending election. He stated that the body had determined the reusable materials, whilst working towards making up for the shortfalls, with renovations going on within the local government offices across the country. He also noted that INEC had available, the necessary funds needed to efficiently carry on its activities within this period.

In addition to the prohibition of certain campaign conducts, as enacted in the Section 93 of the Electoral Act 2022, numerous individuals have urged political parties to base their campaign strategies off issues affecting the country and how to salvage them, rather than indulging in personal attacks against other opponents. Former President of Nigeria, Goodluck Jonathan and his Vice President, Namadi Sambo, during the 2022 IBB Legacy Dialogue, urged overtly shun hate speeches. Sambo asserted that issue-based campaigns should be enacted towards the impending general election and avoid overheating the polity.

Anwal Rafsanjani, Chairman of Transition Monitoring Group also noted that Nigerians must resists political parties that are only interested in attaining power rather than creating clear cut plans to solve the issues that have ravaged the country’s socio-political and economic status. He criticized politicians who resort to attacks on other candidates instead of identifying issues and means to solve them, stating that what the country needs are tangible programmes that can be enacted to hold these candidate’s accountable to the revitalization of the socio-economic systems in the country, asserting TMG’s interest in witnessing issue-based debates and holding these candidates accountable on this basis.

slogans that are infected with abusive ideas, whether they are directly or indirectly aimed at damaging religious, ethnic, or sectional sensibilities are examples of this.

Political candidates should not keep or use armed private security agencies of any kind for provision of security, but we must be prepared in case individuals or groups engage in physical coercion that would cause fear during the campaign.

Previous electioneering campaigns have seen political parties engage in a variety of theatrical performances, in addition to campaigns taking place in official offices and religious groups; however, this trend ought to be altered.

This laws will act as a caution against violence during this election. I hope it will be enforced? There are some cabal who sees themselves as untouchable by any law enforcement agencies who are ready to use even the tugs to carryout their biddings. I hope this law will be use against them?

I’m totally in support of political parties not using religious places and public places for campaign program because those institution are not to be used for their politicking,that are suppose to be unbiased umpire in the political sphere.

To avoid violence in this forthcoming election most especially during this campaign every political parties should adhere to the stipulated law. The law enforcement agencies should make sure that no one should be above the law they themselves inclusive. No cabals using tuggry to manipulate votes. Every so called cabals should be checkmate.

I don’t understand why it is a crime to canvass for votes or campaign in religious places. It is one strategic place candidates go to since time immemorial to show themselves approved. Let’s see how this law is implemented

For me, campaign can be done any where the fact that their is no violence. Campaigning is general we are all Nigeria be it Church and Mosques. We all suffer the bad Government, this is democracy everybody have this right Biko

In previous electioneering campaigns, political parties have engaged in a variety of theatrical performances. Additionally, campaigns have taken place in official offices and religious groups.

Church and mosque campaign should have never been an option, that’s simply trying to manipulate people through their beliefs, INEC should be totally against it

It’s the fact that these politicians are now misusing the opportunity to campaign in church and mosques that is very annoying, they are now going as far as renting people to pretend to be religious leaders.

They need to warn political parties about the dangers of hiring political thugs since doing so would result in an election that is not fair.

It is to the commission’s credit that political parties have been cautioned to comply precisely to the restrictions given in the Electoral Act in order to avoid being sanctioned. This will help ensure that the integrity of the electoral process is maintained.

Parties and candidates that have intentions to educate individuals and groups to engage in physical coercion, which would raise concerns throughout the campaign and ought to be dealt with carefully.

Churches, Mosques found guilty of this electoral crime risks imprisonment or not…. I pray for is free and fair election. God’s intervention in all ramifications.

I don’t seem to understand what the problem is here. People who go to religious centers for worship, are they not citizens who are illegible to franchise? What I have problem with is people who let religion cloud their thinking and get emotional rather than logical. We’ve suffered too long to let tribe, religion and the rest influence our political decision

Relevant area like the mosque and church where we worship God needs to be set aside from political campaign to avoid unnecessary violence.

A church and a mosque is a place for worshipping God and not a place for carrying out political activities, politicians should desist from this act