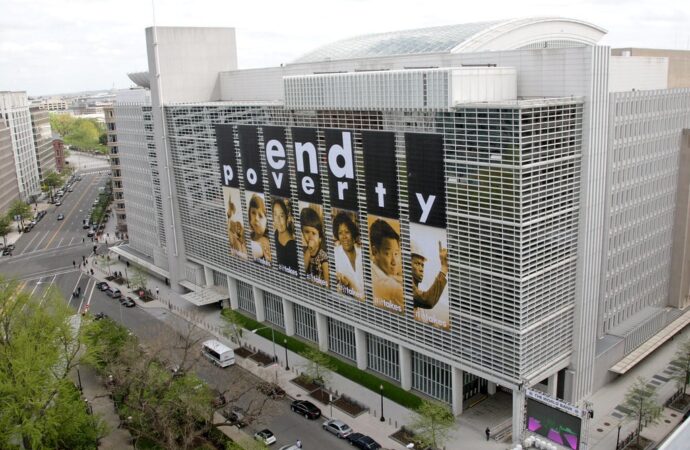 It says CBN’s financing has increased liquidity in the money market.

World Bank has said that interest payments on the Federal Government’s borrowings from the Central Bank of Nigeria (CBN) will gulp over 62 percent of revenue generated by 2027. The international financial organization revealed this in the latest edition of its Nigeria Development Update, which is titled, “Nigeria’s Choice.” The NDU is a biannual World Bank report series which assesses the economic and social developments and prospects in Nigeria in a longer-term and global context. According to the report, Nigeria’s economic performance has weakened since the previous report was published in June 2022.

The Federal Government of Nigeria has been borrowing from the CBN through ways and means advances – a loan facility through which the CBN finances the government’s budget deficits. Ways and means advance (WMA) is a mechanism used by reserve and central banks to help states and governments tide over temporary mismatches in their receipts and payments flow. In doing this, CBN’s advances to the Federal Government in the last seven years rose to an all-time high of N23.8 trillion. This unprecedented rise violated the law, stirred up inflation and worsened the country’s debt burden.

On December 28, 2022, the Senate rejected President Buhari’s request for the approval of N23.8 trillion CBN loans. In May 2015 when the Buhari administration commenced, CBN’s loans to the Federal Government was N789.7 billion cumulatively. However, the current administration has drawn CBN loans each year at an unparalleled level. The government drew N5.6 trillion between January and October 2022 alone. By comparison, between December 2012 and May 2015, ways and means advances rose by only N654.9 billion.

Nigeria’s President’s attempt to seek a delayed approval for the N23.8 trillion in loans that had been spent already caused an uproar in the House. Lawmakers accused the president of violating the constitution and also demanded details of how the money was spent. While the CBN Act allows the CBN to grant temporary advances to the Federal Government to finance budget deficit, it warns that the total amount of such advances “shall not at any time exceed five percent of the previous year’s actual revenue of the Federal Government.”

The Act also stipulates that all advances must be repaid as soon as possible, which is expected to be at the end of the financial year of the Federal Government in the year that the advances were granted. However, analysts have revealed that all criteria of that piece of legislation have been breached by the CBN under current CBN Governor Godwin Emefiele and Finance Minister Zainab Ahmed. If the law was followed, the ways and means of advances to FG for the entire 2022 would not exceed N219 billion, which is five percent of the government’s revenue in 2021.

Due to this approach by the Federal Government and the CBN, the liquidity market was flooded with cash, causing inflation. In simple words, it means that there was more money in circulation and the price of goods and services skyrocketed. The World Bank’s report noted that at least five million Nigerians were pushed into poverty as a result of rising inflation costs between January and September 2022. The international financial institution estimates that about eight million Nigerians were pushed below the poverty line by inflation between 2020 and 2021. The increase in the number of poor people increased in 2022 mainly due to higher prices of local staple foods, such as rice, bread, yam and wheat, especially in the urban and suburban areas.

If CBN continues to loan money to the Federal Government, inflation will never cease. We are the ones impoverishing Nigeria. We need to get it right in this next election.

The continuous CBN’s loans to FG will create more financial instability in the country which is the inflation currently being experience now. The federal government should think outside the box and proffer solutions to the already worsen situation in the country.

According to projections made by the World Bank, interest payments on the Federal Government’s borrowings from the Central Bank of Nigeria (CBN) will consume a significant portion of the country’s total revenue by the year 2027.

The Nigeria Development Update is a report series that is published every other year by the World Bank. It looks at the economic and social changes and prospects in Nigeria over a longer period of time and in a global context.

This huge increase defied the law, stoked the flames of inflation, and made the burden of the nation’s debt even more difficult to bear.

Legislators demanded information regarding the spending of the money as well as accused the president of breaking the constitution in the process of his actions.

Advances are due as soon as practicable, but no later than the conclusion of the federal government’s fiscal year in which they were made.

Every two years, the World Bank releases a new installment of its Nigeria Development Update report series. Future economic and social trends in Nigeria are examined over a longer time frame and in the perspective of the rest of the world.

It is forbidden for the entire amount of these advances to ever be greater than five percent of the real revenue that the federal government brought in the year before.

CBN loans to FG will worsen financial instability and inflation. The federal government should provide creative answers to the country’s worsening position.

If the Central Bank of Nigeria keeps lending money to the Federal Government, inflation will never go away, and Nigeria will continue to suffer under our mismanagement.

The federal government needs to lessen the rate at which they receive loan from CBN in order to control the incessant increment of inflation and stabilize the country’s economic situation.

Inflation will never cease if CBN continues to loan money to the Federal Government, We are the ones impoverishing Nigeria. We need to get it right in this next election.

The rate at which the Budget of Nigeria is going up per year very alarming. The budget is mostly funded by borrowing. Now the WB have done their analysis and discover the danger of continuous by federal government from CBN. Already we experiencing inflation. If care is not taken things might get worse.

The Central Bank of Nigeria (CBN) is a lending institution that covers the government’s budget deficits. The Federal Government of Nigeria has been borrowing money from the CBN through ways and means advances.

The ongoing CBN loans to FG will increase the country’s financial instability, which is already causing the inflation that is already being felt. The federal government needs to come up with creative solutions to the nation’s already dire position.

CBN’s loans to FG fueling inflation, says WB.The country governments and this our CBN is acting like confused set of people without solution . They don’t know what to do anymore